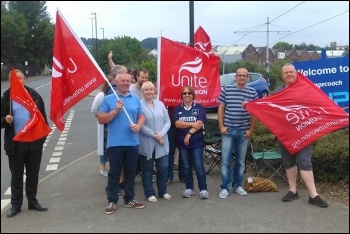 Sheffield Supertram drivers and conductors, members of Unite the Union, took 72 hours' further strike action in pursuit of their pay claim on 20-22 July. This was over the weekend of the city's popular Tramlines music festival. Only thing was, hardly any trams were running!

Despite management's attempts to blame the union, most public and passengers are supportive of the strikers. Management tried to make out that the union wouldn't ballot on an 'improved' offer, but their so-called offer was worth less than that already rejected by nearly 70% in an earlier ballot.

Indeed, active support for the strike is growing. Across the two picket lines, outside the tram sheds and at Castle Square, 133 Unite members attended on 20 July. That's more than the number voting to reject the last offer.

Stagecoach runs the Supertram franchise for the South Yorkshire Passenger Transport Executive. So as well as calling further strike action, Unite should be demanding Labour authority members of the transport executive publicly support the strike and pledge to bring the contract back in-house.