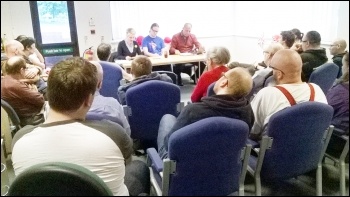 An excellent TUSC meeting took place in Stoke-on-Trent last night despite torrential rain and the shock at the savage killing of Labour MP Jo Cox earlier in the day. It was touch and go whether the meeting would actually take place because of the horror of what had happened.
Before the meeting started it was proposed by TUSC chairperson Liat Norris that we could cancel the event if that was what those present wanted but it was unanimously decided that we should not allow that cowardly act by one individual to stop what was an important meeting from taking place.

This was the biggest public meeting of socialists campaigning for a vote against the EU to take place in the city so far during the EU referendum campaign. People packed into the room to hear North Staffs RMT branch secretary Tim Breed and Socialist Party national organiser Sarah Sachs-Eldridge explain the socialist case against the EU and TUSC's key role in consistently fighting against cuts, not just in words but also in deeds.

This was followed by a lively discussion with many questions and contributions from longstanding socialists and those who were attending this type of meeting for the first time. Many issues were covered: immigration, what will happen after the referendum, how we can strengthen unity among workers across Europe and beyond, were just a few.

However, there were two constant themes that were mentioned by the main speakers and many others in the debate. Firstly, the baleful role by too many trade union leaders along with the TUC, who suggest that the EU will defend workers. Instead they should be exposing the EU 'Employers' Union' for what it is - a bosses' club - and preparing their own members for action to defend workers' rights, jobs, pay and conditions, in or out of the EU.

Secondly, that Jeremy Corbyn should have stuck to his historical position of socialist opposition to the EU instead of succumbing to the pressure of the Blairites to back the Tories' support for the EU. His decision handed the xenophobes, nationalists and racists involved in the largest Brexit campaigns an opportunity to portray themselves as the unheard voice of ordinary working class people.

After this meeting, TUSC locally, along with Stoke Socialist Party and others, will be stepping up our campaign for a vote to leave the bosses' EU and for building unity of workers across Europe and beyond to fight for real socialist change.

This version of this article was first posted on the Socialist Party website on 17 June 2016 and may vary slightly from the version subsequently printed in The Socialist.