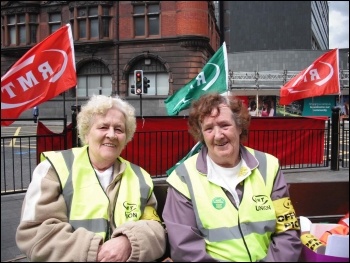 The striking cleaners lobbied a Community Relations Surgery organised by Nexus (the public body which oversees the maintenance and operations on the Metro) and this was supported by the Northern region TUC who came along to endorse the picket line.

Others who supported the cleaners approached the Nexus surgery to complain about the disgraceful treatment of Churchill's towards its staff.

Nexus attempted to wash their hands of responsibility, arguing it was nothing to do with them as they contracted out the operations of the stations and trains to DB Regio. 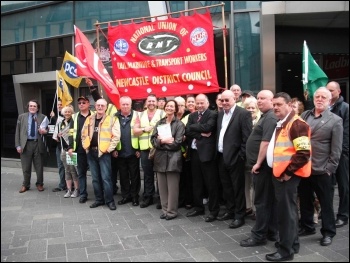 The 48-hour strike, which was backed by a 100% vote from Churchill cleaners, started at 10.30pm on Sunday night.

Stuart Roberts, RMT senior staff rep, explained that the dispute was over two issues: "The first one is over the disgraceful dismissal of a [RMT] member, whose only crime was to simply tell the management we were short staffed.

"The second is a zero per cent pay offer to 'minimum wage' cleaners, from a company whose profits rose 81% in the last financial year".

Stuart went on to say: "It is a disgrace that DB Regio, who run the Tyne and Wear Metro on behalf of Nexus, decided to try and break the strike by bringing in dozens of managers.

"Even though they've always said that the dispute was nothing to do with them, and was between the RMT and Churchill".

"It is about time Churchill negotiated with the union to settle this dispute, rather than pull down the shutters and refuse to talk".

Stuart ended by commenting: "The company director, Simon Wren, commutes from London to the north east via helicopter - so much for them having no money!" 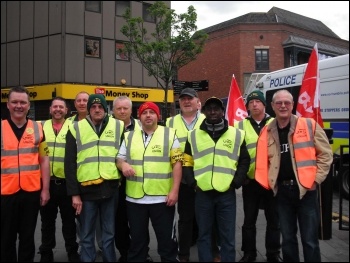 Craig Johnston, RMT relief regional organiser, said: "These staff are suffering by taking action, but they are doing so because they are prepared to stand up against an aggressive and confrontational employer who offered a zero per cent pay increase, which it describes as a 'generous' pay offer".

Craig finished by saying: "My view is this dispute is about dignity and respect. I'm calling on the Labour-controlled integrated transport authority to kick Chuchill's off the Metro!"

You can tell Churchill Cleaning Services what you think by emailing: 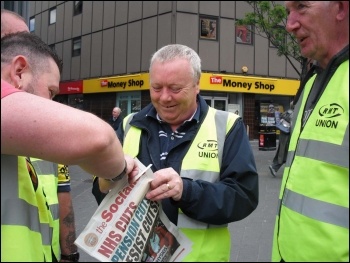 Reading the Socialist, at the lobby in support of Churchill cleaners, 12.6.12, photo by Elaine Brunskill   (Click to enlarge)