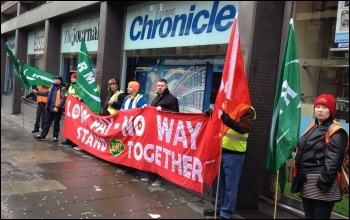 In the ongoing battle against poverty pay, striking Churchill cleaners from the Tyne and Wear metro lobbied the Labour dominated ITA (Integrated Transport Authority) demanding that the transport chiefs should force the privateer 'rubbish company' to pay a living wage.

In freezing weather the strikers ran a soup kitchen outside Newcastle civic centre, where the ITA was meeting.

Churchill strikers feel betrayed by Nick Forbes, Labour leader of Newcastle City Council, who urges employers in the North East to introduce a living wage, yet refuses to exert pressure on Churchill to do this through the ITA that runs Nexus and the metro.

Steve Hedley, RMT union assistant general secretary, made an impassioned speech to the meeting of the ITA, demanding that Labour councillors ensure Churchill's cleaners are paid a living wage.

Afterwards Steve said: "We've set up a soup kitchen to show the ITA that our workers are on the breadline, working for £6.19 an hour.

"Even after working overtime many of them are claiming benefits to make ends meet. We believe Newcastle City Council has a responsibility, not only to our members, but also to taxpayers in Newcastle who are subsidising a bad employer who pays subsistence money and forces employees into having to claim benefits."

This is the twelfth strike day taken by Churchill cleaners, fighting pugnacious bosses who recently described a zero per cent pay increase as generous.

Yet over the past five years Churchill has doubled its profits, making nearly £7 million from the exploitation of its workforce.

Commenting on the strike, Micky Thompson, RMT regional organiser, said: "Given the intransigent position of Churchill, Nexus, DB Regio and the ITA, we are more determined and resolute in our objective in achieving the living wage.

"If that means more industrial strike action and direct action by targeting those in authority then so be it."

Even though it was the metro cleaners' 12th strike the local press did not approach their union at any point.

After the protest at the ITA it was decided that if the press were not going to come to us, then we will go to the press.

So the union leaders and the cleaners walked down to the officers of the local Newcastle newspapers and began their protest.

After 10 minutes of chanting and demanding that they stop their media blackout one of the journalists came out and approached us.

She then interviewed Craig Johnston, the Relief RMT regional organiser as well as one of the stewards. One journalist even came out to do a video interview.

The determination of the union certainly caught the journalists' attention. It is this determination which will hopefully lead these cleaners to victory!

"Our members have made it quite clear that they will press on with their fight until Churchill is forced, one way or another, to pay a fair wage and offer decent conditions to Metro cleaners.

"While our members have been handed real-terms pay cuts and get no sick pay or pension, the company has more than doubled its profits and its boss has seen his pay rise by 18% to £160,000 over the last five years.

"That is a disgrace, and it is not good enough for the Tyne and Wear Integrated Transport Authority, Nexus and operator DB Regio to pretend it has nothing to do with them.

"These cleaners are employed as essential staff on a public service, and it is the moral responsibility of the ITA, Nexus bosses and DB Regio to insist that they get decent pay and conditions.

"It is shameful that Nexus won't even let the cleaners have free travel on the network they serve - a concession that would cost absolutely nothing.

"Metro users have shown enormous sympathy to our members over the many months of this dispute, and we would ask them to raise the issue with their local councilors and MP, and with ITA chair Councillor Dave Wood and Nexus boss Bernard Garner.

"This battle has taken on a national significance as part of RMT's campaign against low pay imposed by greedy contractors on cleaners and other essential transport staff, and our members have shown their resolve to keep up that fight until they win."

This version of this article was first posted on the Socialist Party website on 25 January 2013 and may vary slightly from the version subsequently printed in The Socialist.