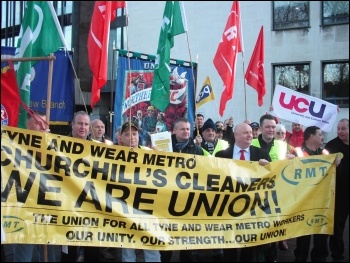 "If Bernard gets up your nose - picket!" Was the slogan on the leaflet handed out by cleaners from Churchill Contract Services, who work on Tyne and Wear Metro.

The Metro cleaners were lobbying the meeting of Bernard Garner (the boss at Nexus, which is the public body which oversees the maintenance and operations on the Metro) and the Integrated Transport Authority (ITA) at Newcastle's civic centre on 26 January.

The transport union RMT has launched a campaign to fight for the entitlement of the low-paid Metro cleaners to have free Metro travel.

Stuart Roberts, Churchill's senior staff rep, pointed out that: "Churchills are blaming DB Regio [the contractor who operates stations and trains], DB Regio say it is the responsibility of Nexus. Nexus blames the Integrated Transport Authority."

He also pointed out that the ITA is run by Labour councillors: "They should hang their heads in shame!" 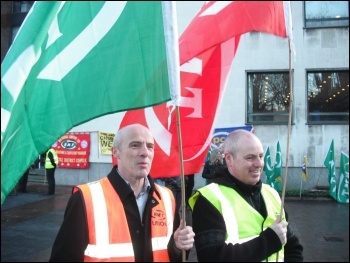 Craig Johnstone, RMT relief regional organiser, told us: "This is the harsh reality of privatisation and contracting out.

"Workers on minimum wage, no sick pay scheme, no pension scheme, and no staff travel like other Metro workers get."

"Labour councillors, Nexus and ITS can put this right at no extra cost. Labour councillors say they are campaigning against poverty, then leave workers like this struggling - it's not too late for them to do the right thing".

We warned that privatisation would be a charter for the spivs and speculators, and would lead to worsening conditions for Metro workers.

Alongside fighting for travel concessions we must also put forward the case for the renationalisation of the Metro, under democratic workers' control.