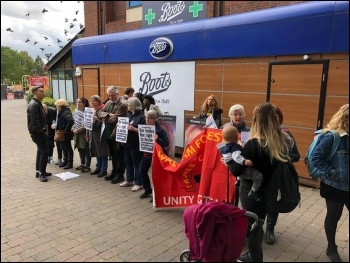 It's appalling that the local MP Stella Creasy, who has campaigned in parliament for abortion rights in Northern Ireland, has been subjected to a campaign of intimidation and harassment by 'pro-life' organisation 'CBRUK'.

This struggle is all our struggle. We should have had a community show of strength against them. If they come again there should be even more of us. The right to have abortions has been a hard-fought battle over 40 years and it's a right we should all defend rigorously.

Like I said to one of these pro-lifers: "You only pretend to care for life from nought to nine months. Where were you these last 30 years when we've been in this square campaigning to stop maternity services from being cut, or doctors' surgeries closing?

"Where were you when nurseries were closed and privatised? When school dinners were threatened with privatisation? Where were you when the libraries closed? Where have you been to stop school cuts or the cuts to post-16 education?"

We in the Socialist Party joined the counter-protest after we had just finished campaigning in the square for the 27,000 flats being proposed in Waltham Forest to be council homes and not private flats. As I said to someone from CBRUK: "All these issues affect women's choices, and I've not seen you here campaigning on them, ever!"

This issue is not just about one woman MP - it's about all women, and particularly working-class women whose choices are taken away by poverty every day of their lives in capitalist society. A socialist society would mean all women having choices, free from the pressures of economics or backward social ideas.