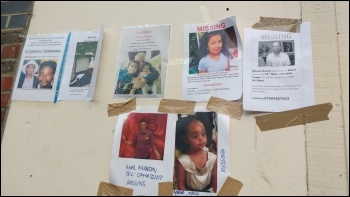 Outside the Tower, photo James Ivens   (Click to enlarge)

Councils must act - cladding off now!

The weeks go by, and still survivors of the Grenfell Tower fire are homeless, and still cladding testing is finding blocks around the country unsafe without action. Meanwhile, the official inquiry's descent into a cover-up makes the call for an independent workers' movement inquiry doubly urgent.

For an independent inquiry led by workers' and residents' organisations

When the government announced that judge Sir Martin Moore-Bick was to take charge, it was immediately apparent that the ruling class was choosing a safe pair of hands for itself. Although an expert in commercial law, Moore-Bick's foray into housing involved allowing Tory Westminster council to rehouse a tenant 50 miles away in Milton Keynes.

Rightly the community has no confidence in him. It's increasingly clear that the class responsible for this crime cannot be trusted to investigate it.

The Hillsborough stadium disaster campaigners' 28-year struggle for justice has led to widespread understanding that the establishment's overriding concern in such situations is to cover its own back. This means, among other things, blaming the victims rather than the real perpetrators.

In a guarded form, this started immediately in some quarters of the capitalist press and political establishment. But it is clearly apparent to most observers who is to blame:

The authors of the austerity programmes that have savaged fire services and architects and building inspectors in councils. Profit-hungry private contractors. National and local governments' privatisation and deregulation drives.

In this situation, only the trade unions, working in liaison with local tenants' and residents' groups, have the authority to establish a meaningful investigation. For example, general union Unite which organises housing and construction workers, and the Fire Brigades Union.

The unions should use their resources to initiate a genuinely independent workers' inquiry, with far-reaching terms of reference set by survivors and those immediately affected. Jeremy Corbyn could also step in and use his huge authority to start this process.

Take the cladding off now

More are still waiting for results before any decision on removing cladding. Why? At this stage the material has been decisively proven unsafe.

In Greater Manchester, a housing association and an ex-council 'arm's-length management organisation' (Almo) have actually suspended removal on 20 blocks where cladding failed tests. An executive for one said: "Advice regarding the removal of cladding is now unclear and there is conflicting information about the need to remove the panels"!

Councils must act now to make working class homes safe. They should spend reserves to fund emergency maintenance work and 24-hour fire watches for all tower blocks, and send the bill to central government.

The Socialist Party encourages residents to organise to fight for safety. Our members have been campaigning on this issue, and working with tower block residents to establish safety campaigns. We have raised the idea of withholding rent if necessary.

The issue of rehousing in Kensington and Chelsea is still live. There are 1,399 properties standing empty there - more than any other London borough.

When Jeremy Corbyn raised the idea of requisitioning these empty properties, there was a horrified reaction in parts of the capitalist media. Unfortunately, the Labour Party locally and nationally does not seem to be echoing his call.

However, it remains a realistic and very popular demand. 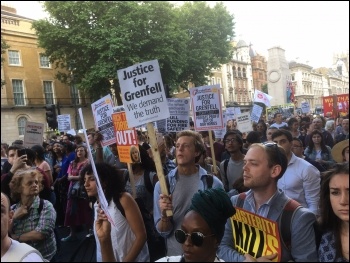 After all, this is not about granny's flat that hasn't been sold yet, as the capitalist press would have us believe. Rather it's about land 'assets' mainly belonging to investment companies, hedge funds and oligarchs, traded on international markets to make millions for their owners.

The value of such assets drops if they acquire tenants, and so some have remained empty for up to 15 years. In fact, the number of empty homes has swollen as the rate of return on property outperforms productive forms of investment in crisis-ridden capitalism.

The real scandal is that families with nothing left after the fire are pressured into taking inappropriate accommodation far from their home community, while these potentially suitable properties continue to stand empty.

And there is the continuing scandal of the £300 million languishing in the council's reserves while homeless survivors are stranded. The main purpose of Kensington and Chelsea's housing income surplus was not ensuring safe, well-maintained council homes, but providing the richest private residents with huge council tax rebates.

The local fear over dispersal is based on the real experiences of working class communities in North Kensington and neighbouring west London areas. The Tories - and Blairites - are the friends and representatives of big landlords and property developers.

This isn't a recent development. In the 1960s, tenants and labour organisations fought against local slum landlord Peter Rachman, a campaign involving many socialists.

Even before that, in the 1940s Communists in North Kensington lead a campaign of occupation of luxury houses. In a parallel with today, many grand homes were unoccupied while working class families who had been bombed out in the war remained homeless. These early examples of squatting attracted huge support and interest from working people across London.

Such traditions have left their mark on consciousness locally. It is to those traditions local people will need to return to build an effective fight against the super-wealthy elite which caused this disaster, and which will cause others if its rule is left unchallenged.