Wallasey Corbyn supporters meet in open resistance to the Blairites 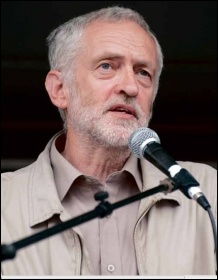 Hundreds of local Jeremy Corbyn supporters met on 2nd August to oppose the suspension of Wallasey Constituency Labour Party (CLP) on the Wirral, Merseyside. Wirral Socialist Party welcomed and attended the meeting, which should be the start of a mass fightback to deselect Angela Eagle MP and the other Blairites.

Eagle had been invited to address the meeting or send a representative to do so. Instead she chose to attack the meeting in the media in advance, labelling the holding of a meeting as "bullying and intimidation". The likes of Eagle aren't interested in the 'unity' of Labour or in reaching an agreement with the membership, but in defeating the Corbyn surge and driving out left activists.

The great majority of Corbyn supporters understand this and don't want compromises or retreats that will embolden the Red Tories, but a resolute struggle to defeat them and their cuts. A Socialist Party member calling for the deselection of all Blairite politicians, including cuts-making councillors, received strong applause.

800 people have joined or rejoined Labour in Wallasey to support Corbyn, doubling the membership of the constituency. Yet on the basis of barefaced lies by a handful of rightwingers, local Labour has been banned from meeting indefinitely! As we explained in the Socialist Party leaflet:

The suspension of the CLP and the vicious campaign of lies against Corbyn supporters confirms our warnings: a truce cannot be reached with the Blairites, a mass struggle is necessary [for] anti-austerity, socialist policies; Labour must be refounded as a democratic mass party.

Wallasey CLP vice-chair Paul Davies rightly told the meeting: "They can stop Labour Party meetings but they can't stop us having meetings".

The local trade union bodies that called the meeting are to be commended for taking such a well-attended initiative. Wirral Socialist Party is now calling on the trade union movement in the borough to organise ward and constituency level public meetings across the Wirral to take forward the struggle against the Blairites and their policies.

This version of this article was first posted on the Socialist Party website on 5 August 2016 and may vary slightly from the version subsequently printed in The Socialist.