Unite members working for Transport for London (TfL) at the Woolwich Ferry site in London began a ballot for strike action on 16 May.

Unite union has negotiated a 100% furlough agreement with Briggs Marine, the contractor who currently runs the Woolwich Ferry.

Unite the Union members employed by Briggs Marine - which has the contract to run the Woolwich Ferry on behalf of Transport for London (TfL) - have begun ten days of strike action.

Workers who operate London's Woolwich Ferry are to strike for ten days in a dispute over pay, safety, and staffing

The delivery of new, hybrid boats will make a number of jobs on the ferry no longer necessary

A speaker system boomed down Woolwich High Street calling for the scrapping of zero-hours, for a £10 an hour minimum wage and for workers to get organised and join trade unions

Greenwich council is threatening 22,000 council residents with a rent increase in April 2017. The council has indicated that it will implement the housing act, including 'pay to stay'. 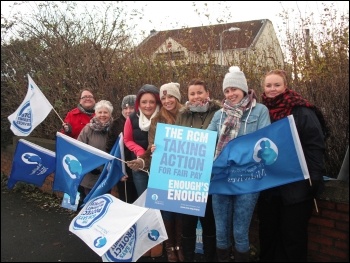 Striking out against bullying

Occupational Therapists in Greenwich are striking on Wednesday 21st May

In the aftermath of the Woolwich killing, a minority has been involved in an increased number of racist attacks

The unprovoked and vicious killing of an unarmed soldier in Woolwich was an horrific event which must have been profoundly traumatic for the people who witnessed it, and, of course, an appalling tragedy for the victim, and the victim's family and friends