Racists - stay out of Wrexham! 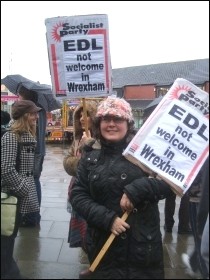 ON SATURDAY 21 November, the racist English Defence League, masquerading as the Welsh Defence League, held a demonstration outside a pub in Wrexham town centre. It comprised of 30 football hooligans from Bolton and a mere half a dozen local racists who chanted slogans such as "kill the Muslims".

There was an extremely large police presence around the pub, and four members of the EDL were arrested for public order offences.

More than 150 Wrexham FC supporters, shoppers, and working people opposed the racist demonstrators. One woman, laden with shopping bags, summed up the feelings of the whole town when she stood her ground as the EDL tried to rush the counter protest. "This is our town and you are not welcome here", she shouted. 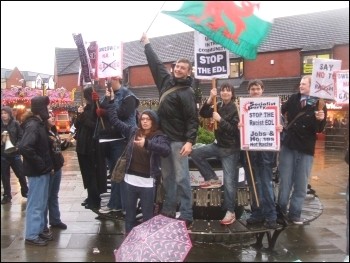 Meanwhile, Wrexham Communities Against Racism held a "communities' celebration" in Queens Square, to bring together all sections of our communities. More than 300 people throughout the day attended the celebration, despite the torrential rain. 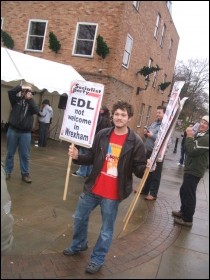 Amongst the speakers were Dave Reid, regional secretary of Socialist Party Wales, who talked of the need to create a new political voice for working people that would cut across the divisive racism of the EDL and the far right, and Rhys Conway, of Bangor Socialist Party and Youth Fight for Jobs, who spoke about the disproportionate burden placed on young people by the crisis of capitalism, and encouraged the audience to head down to London for the 28 November YFJ march. 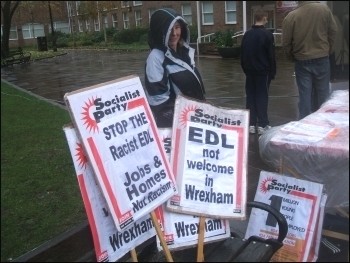 Our Socialist Party stall, given pride of place at the celebration, was busy throughout the day, as workers and young people spoke about the inequality evident in our society that feeds racism, and the need to build a new workers' party to overcome racism and inequality.