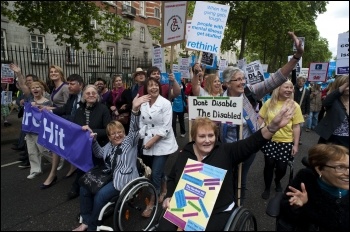 Steven Bottrill, whose disabled mum Stephanie killed herself because of the bedroom tax, said: "Hopefully now someone will listen. Someone will realise what has gone on and change things"

Give us jobs, not Tory lies

We've been hearing this rubbish for years - British workers are lazy - and now Eton-educated Tory London mayor Boris 'the bankers' friend' Johnson has stepped in, accusing British workers of sloth

Unemployment: We're told that Thatcher 'saved the country'. But unemployment skyrocketed under her governments - from 1.09 million in May 1979 to 3.13 million in July 1986. And these figures were probably an underestimate...

The 'workfare bill' and sanctions targets

Con-Dems have no solutions to unemployment: On budget day, the latest unemployment figures were published and showed yet another increase in the number of people out of work, writes Dan Crowter, Coventry Socialist Party.

After months of illegal shift patterns and being expected to work without breaks under a bullying management at my workplace (as previously reported in the Socialist), things are looking up, writes Hannah Parker.

2013: Prepare for a mighty battle against deeper cuts

The coming year, like 2012, will be one of intense working class struggles, writes Peter Taaffe

United Socialists of America: A recent poll by Gallup in the US has shown that 39% of Americans now view socialism positively.

"Protect us from Provectus!" chanted a 200-strong march in North Derbyshire on Saturday 22 September...

In a dazzling display of talent a new generation of Olympians is breaking records. By brutal contrast, 75 million 16 - 24 year olds globally have been thrown on the scrapheap of unemployment

240 hours' work for no pay - then back on the unemployment scrapheap: After being unemployed for over eight months in Hull, one of the worst areas for unemployment in the country, I was put onto a 'voluntary' work experience scheme

Unemployment statistics published yesterday show that the number of people who have been unemployed for more than one year is up 27,000 in the last three months, reaching a total of 887,000...

The ugly truth behind the latest unemployment figures

A slight fall in the most recent set of unemployment figures hides the reality facing millions. The fall has only occurred because of an increase in part-time work. And the number of people claiming unemployment...

Unemployment continues to plague austerity Britain. Over 2.6 million people are out of work. And we're disproportionately aged under 25, writes James Ivens.

When I last visited the Jobcentre I was given two letters. I was told I should attach them to any CVs or job applications I sent out, writes a job seeker. 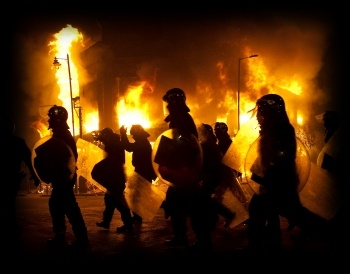 Riots: rioters and police in Tottenham during August 2011 disturbances , photo by Paul Mattsson

Britain in 2012 is a ruthless 'them and us' society. Millionaire ministers dish out life-destroying cuts to working class and young people while doing the bidding of their super-rich pals in big business... 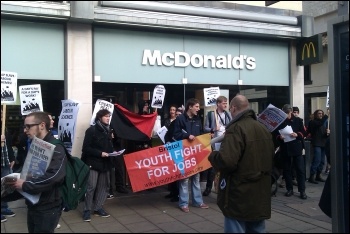 Cait Reilly, one of the young people forced to work for free under the existing schemes is in the process of a judicial review of the government's workfare policies, writes Paul Callanan 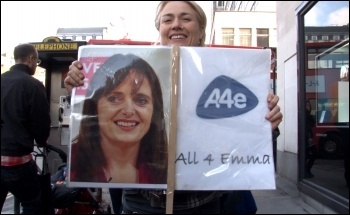 Youth Fight for Jobs says escalate protests for the scrapping of 'workfare' and the creation of decent jobs!

Following retreats by the government on its flagship ‘work experience’ schemes, YFJ has called a 'day of action' on Budget Day and is calling for trade unions and anti-workfare campaigns to jointly discuss organising a mass demo against slave labour in the summer