GMB members from United Utilities, Northumbrian Water, Yorkshire Water and Hartlepool Water are angry at rampant profiteering. Debt levels and consumer prices have risen, and two of the companies are attacking workers' pensions.

Twenty-three of the 40 anti-water charges protesters arrested earlier this year in Ireland are expected to be charged with "false imprisonment" of the deputy prime minister following a peaceful sit-down protest in Dublin in 2014.

Dublin came to a halt on 20 March when 80,000 people marched against the government's imposed water charges

For breaking an injunction compelling them to stay 20 metres away from all water meter installations, five protesters have been jailed for between 28 and 56 days each

"Call off the dogs of war on people in Jobstown." These were the words of Socialist Party TD (member of parliament) Ruth Coppinger when she challenged the Tánaiste (deputy prime minister) Joan Burton in the Dáil (Irish parliament) on 12 February

Arrests of anti-water charges activists in Ireland have been continuing. As of today (16th February) 22 people have been arrested including three teenagers

What we saw & heard: Paul Murphy, the socialist TD (MP) for Dublin South West, was subjected to a dawn arrest by Gardai (police) last Monday, 9 February

Despite efforts by Stormont politicians and many in the Northern Ireland media to vilify them, striking NI Water workers have won significant concessions from management

London Socialist Party members attended a protest at the Irish embassy in London. 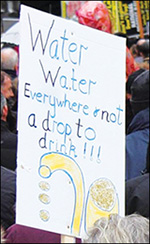 But movement stronger than ever: On 14 November, an anti-water charges protest took place in Jobstown, Tallaght against Labour Tánaiste (Irish deputy prime minister) Joan Burton. Following this the entire media, government and establishment went into overdrive.

Poorest robbed: A new report on the effects on households of Con-Dem austerity cuts and income tax reductions found, unsurprisingly, that wealth has shifted further from the poorest to the richest