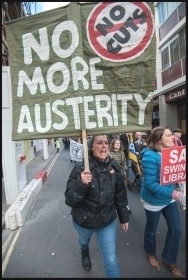 It's relatively easy to talk about austerity in terms of numbers. 3.9 million children living in poverty in the UK, the poorest tenth of the UK population seeing a 38% decrease in their net income and the richest tenth losing the least.

When a paper like the Financial Times runs a story with the headline "UK reaches socially acceptable limits of austerity" it is evident that the Tory agenda of destroying the welfare state is underway.

However, on a personal level, austerity hurts. I joined the Socialist Party because I realised that none of the main parties genuinely represented change and that austerity and capitalism were both in part to blame for my misery. After my partner of eleven years died and I became a single parent to a grieving child, I expected the welfare state to provide for me and my daughter in our time of need.

Instead all of my benefits were stopped. My partner died just before the renewal date for tax credits, leaving me on an income of £20 child benefit a week. I was not entitled to bereavement allowance or widowed parent allowance because we were not married.

There was no longer the ability to get crisis loans to fall back on. I put a claim in for Employment Support Allowance in November which did not pay out until February.

All of my partner's savings were spent on sustaining me and my daughter but because we had savings I couldn't get a funeral payment, leaving me with a large debt.

Prior to his death I had been a struggling student with mental health issues, desperately trying to keep going. When I needed the state the most, after his death, it abandoned me.

I was found fit for work after a dreaded work capability assessment, despite being in the depths of despair with depression and anxiety. A man from the council visited my home only a few months after his death to check I hadn't moved someone in just so I could continue to get housing benefit.

Austerity hurts. Austerity kills. The only alternative to austerity long-term is an alternative to capitalism and that lies in socialism, socialist parties, and the reinvigoration of the working class.