80 plus Whipps Cross hospital workers, Unite members and Socialist Party members came out in protest against the humiliating 3% offered pay rise for all NHS workers on 25 August

Lots out clapping, taxis tooting their horns, bagpipes playing and a bit of chanting - "PPE for all frontline workers", "mass testing for all" and "save our NHS", writes Elaine Brunskill.

Unison unelected officials, not even employed by Barts Health Trust or Serco, have put out a leaflet that attacks Unite the Union and the Socialist Party following the deal that concluded the recent Barts dispute

Domestic staff and porters at Whipps Cross Hospital in east London have won a significant pay increase and job security. The pay rise - over 20% - and permanent contracts - follow a sustained campaign by general union Unite.

Health service is not safe in Labour or Tory hands: When you go into one of the main blocks at St Bartholomew's hospital in central London, it's almost like going into a posh hotel, writes Alison Hill.

On 17 March it was announced that Barts Health NHS trust, the largest in the country, was being put into special measures after a report found "a culture of bullying and low-morale at Whipps Cross"

Under successive governments PFI contracts throughout the UK totalled £68 billion

Trade Unionist and Socialist Coalition candidate for Walthamstow, Nancy Taaffe, responded to the announcements in the press on Whipps Cross going into 'special measures' 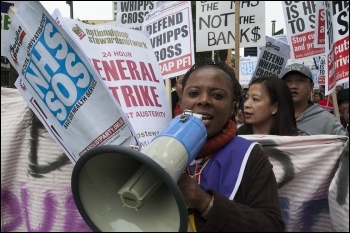 The need for an organised, independent, political expression of the will of the 99% and our demands for health, homes and decent jobs has never been greater

In April, the Unison branch secretary and stewards employed by Initial at Whipps Cross hospital resigned from Unison.