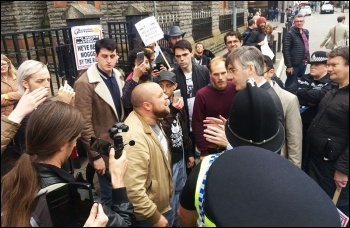 Jacob Rees-Mogg, aristocratic, misogynistic, homophobic, billionaire landlord and current pin-up boy of the Tory right, was invited to speak at a venue in Cardiff on 29 September. Young Socialists and Socialist Students made sure there was a crowd of working-class activists and campaigners there to give him a raucous reception and confront him regarding his voting record.

The prospect of a visit by a class enemy such as Rees-Mogg invigorated the campuses of University of South Wales, Cardiff Met and Cardiff University. Stalls and Freshers work helped to build a crowd of over 40 activists, students and young people arriving an hour in advance of the vile Tory's visit to hand out placards, talk to passers-by and fill the air with chants and slogans shaming him for his record of supporting austerity and refusing to vote for making private rented properties fit for human habitation.

Anger against the MP was already sky-high among the working class of Cardiff as he was rightly seen as a perfect representative of the type of parasitic billionaire landlord and legislator responsible for the tragedy at Grenfell Tower - which resonated broadly and deeply throughout the working class in Cardiff.

This anger was then magnified and amplified when Rees-Mogg outed himself so proudly as a regressive misogynist with his vile views on abortion. Abortion rights campaigners from Cardiff joined the protest.

Rees-Mogg arrived to a loud and hostile reception, and was confronted by a number of Socialist Party members and other attendees of the rally. He stood and addressed one or two questions from the assembled crowd, but to his shame his answers were like him - a cruel and unfunny caricature of the worst of our racist, misogynist and reactionary past.

He answered questions regarding abortion with "I believe life begins at conception" and a follow-up query regarding the lives of children at Grenfell with "I believe Conservative policies are what is best for the poor."

Rees-Mogg shuffled inside to an appointment with the 'great' and 'good' of Cardiff, escorted by more than a dozen police officers. A Socialist Students activist was threatened with arrest.

Following a few more chants and a cheer for the work done, the crowd dispersed before reconvening for a celebratory night of music and comedy put on at the Grange pub - a gig which had been chased out of other venues.