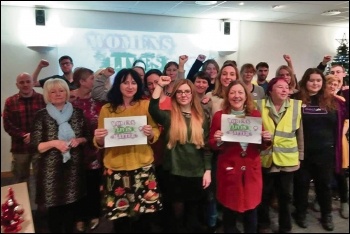 Congratulations to Women's Lives Matter for organising a brilliant first national meeting. People from around the UK attended and brought with them a wealth of experience, ideas and proposals.

Sinead Daly, CEO of Dundee and Angus Women's Rape and Sexual Abuse Centre, opened the meeting by saying that we shouldn't have to have this discussion.

But all the political parties who run councils are guilty of an abject failure to combat austerity, including cuts to women's services and refuges.

And despite Corbyn's anti-austerity stand, at local level, Labour councils have been implementing savage cuts to these services.

Speaker after speaker graphically demonstrated with examples from their own experience how public sector cuts in general have impacted on women's lives and made it more difficult to leave an abusive relationship.

Women and their children are turned away from refuges as there is no capacity to take them.

"What happens to them?" Sinead asked. "How many are killed? How many turn up at A&E?

"Our lives do not matter to pro-capitalist politicians. If they did, they would find the money to fund these services.

"The wealth is there in society in the hands of a small number of rich and powerful people."

Speakers showed how cuts in benefits, mental health services and a chronic shortage of council-owned homes exacerbated the problem.

While domestic abuse affects women across society, it is much more difficult for working-class women to escape it because of lack of resources.

The meeting agreed that our main focus should be to campaign against domestic violence and against the cuts in funding for women's refuges and women's centres.

Amy Cousens, a longstanding activist in Women's Lives Matter in Yorkshire and Socialist Party member, introduced a discussion on organising the fightback.

Amy drew on the experience of fighting to keep Doncaster Women's Aid open where MPs and councillors had said they would do all they could but had not saved the service. That has already resulted in enormous suffering.

Her conclusion was that our campaign cannot wait for those forces to be prepared to act against the austerity funding cuts that lead to closures. Women cannot wait.

Leeds Women's Lives Matter proposed campaign demands, a guide to action and a model motion which people in the meeting expanded on.

It started with the demand for councils to set needs budgets to provide the services everyone needs.

Amy's appeal to the meeting to grasp the nettle of this strategy was not opposed - the meeting included members of many trade unions and campaigns, the Green Party, the Labour Party and the Socialist Party.

Amy was also able to report on the links the campaign has already built with service providers in other parts of the country.

Proposals were made to raise the campaign in our trade unions at local and national level. We are proposing a Day of Action on International Women's Day, 8 March 2019.

An enthusiastic and inspiring meeting. A call to action!