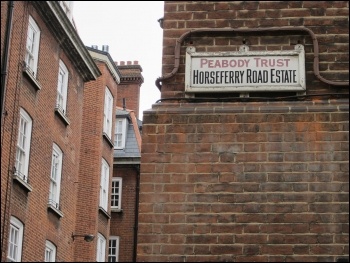 We gathered outside Peabody Head Office on the evening of 19 February to make the point that cuts to the community and neighbourhood services cost lives, and are counter-productive.

Housing association Peabody plans to drastically cut its neighbourhood managers and has already done away with the community services team. The organisation has already lost valuable staff trained to intervene in domestic violence, abuse, and anti-social behaviour cases.

Many staff leaving work welcomed the action, took leaflets, and described the constant change and restructuring that the Peabody executive has inflicted on the organisation.

One person said: "Every time a new executive member comes in, you know there's going to be another restructure. It wastes time and resources and is completely unnecessary."

The cuts will put the physical and psychological welfare of service users and staff in danger, and are being implemented on the pretext of efficiency savings. Yet Peabody reported a surplus of £149 million in 2019 and the cuts are designed to save just £1 million. The savings however will not be used to reduce rents or service charges, or increase frontline staff pay.

Shac and the Unite the Union Housing Workers Branch are already planning their next joint action, so check their sites - housingworkers.org.uk and shaction.org - for regular updates