From: The Socialist issue 1063, 11 September 2019: Whose side are you on? Tories out - Corbyn in with anti-austerity and socialist policies 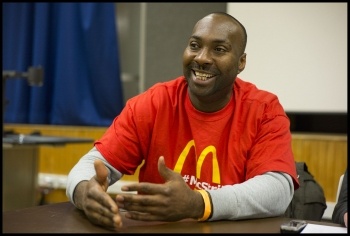 McDonald's striker Lindon, who will be walking out on 12 November spoke in the '£15 an hour minimum wage - is this what we need to fight for?' session at Socialism 2019. Below are extracts from his speech about why he is fighting for £15 an hour

"I'm a father of three and we're going on strike on 12 November. Being a worker for McDonald's for the past seven years I know it doesn't treat people with respect.

Managers talk to you anyway they want to. The way McDonald's treats us is appalling.

Fighting for £15 an hour means a lot to me. It would mean I don't have to do two jobs. Currently I'm full time at McDonald's and part time at Sainsbury's. I start at Sainsbury's at 7am and then at McDonald's at 3pm until 11 or 12 at night. I basically only sleep 3 hours in the week.