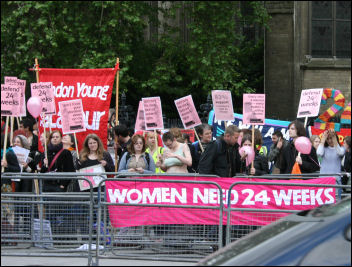 Shona McCulloch looks at the tactics of right-wing opponents of abortion rights and of choice, and how best to safeguard women's hard-won gains.

Direct action tactics by anti-choice zealots in the USA have produced horrific tales of vicious attacks including the cold-blooded murder of abortion clinic staff. Anti-choice methods have also shifted from lobbying Republican politicians for outright bans on abortion to fighting for piecemeal legislation to reach the same outcome.

Recent horrific proposals by right-wing politicians in various US states under this onslaught include forcing women to carry dead foetuses to full term; removing the choice to terminate even where the mother's life is at risk and treating miscarriages or suicide attempts as "suspected murder" or "attempted murder".

Their plans also include allowing doctors to lie to parents about birth defects so even a severely deformed foetus will not be aborted. They would also let employers refuse to cover medical insurance for birth control and fire women if they discover they use contraception.

Virginia will soon become the eighth US state requiring women to receive ultrasound scans if they ask for a termination. The Catholic Archbishop of St Andrews and Edinburgh, Keith O'Brien, is now advocating such measures in Britain.

Some anti-choice campaign groups in Britain are modelled on US examples, often with direct links and funding. In London and Brighton, British Pregnancy Advisory Service (Bpas) clinics were targeted by groups taking part in the abhorrent '40 days for life' campaign in the Lent run-up to Easter where deluded zealots harassed service users trying to access the clinics.

In Brighton a group, harboured and supported by a church in Worthing, charmingly named themselves 'Abort67'. They displayed graphic imagery of aborted foetuses outside a Brighton clinic entrance, gave out misinformation and tried physical encircling to stop people entering the clinic.

Brighton Pro-Choice has been set up by local feminists, socialists and anarchists. An important agreement, based on advice, experience and evidence from the USA pro-choice movement, decided not to make the clinic the site of a pitched battle between ourselves and anti-choice advocates.

A vital secondary objective of our campaign is to empower those who use the clinic. Casting service-users as helpless victims, who we need to storm in and save, is actively disempowering.

However traditional strategies used to give power to targets of the right wing and help them build and lead their own campaigns, such as supporting black minority ethnic communities to see off the racist BNP or EDL, are not appropriate for trying to empower people who are going through an acutely difficult period in their lives which they may want to pass through quickly.

In Brighton activists offered an 'escort service' to those wanting to use the clinic so they can do so without harassment. They are also giving support to clinics for every day of the '40 days for life' campaign. Supporters are bringing in baked goods for clinic staff and service users.

An international campaign also encourages people to donate to family planning clinics for every day of the campaign. Socialist Party members have built links between the campaign and local trade unions.

Several protests are planned to oppose Abort67 in a way that does not create a pitched battle near the clinic. On 15 April a 'Carnival for Choice' protest and march is planned in Worthing, to build opposition to Abort67.

The leader of Abort67 is seemingly due in court in September for his previous anti-choice activities and we will organise a lobby of this. We must oppose these reactionaries at every turn.

We should not take for granted that the gains of the past, secured by struggle, have somehow become inalienable rights - our rights only exist when they are accessible to all and, under capitalism, remain only as long as we can defend them.