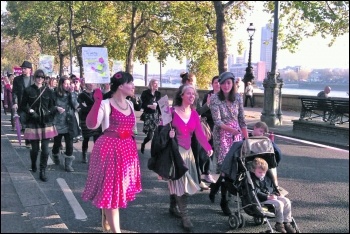 Fifty years ago this month the 1967 Abortion Act was signed into law, coming into effect six months later. The law legalised abortion of foetuses up to 28 weeks gestation (reduced to 24 in 1990) and within certain circumstances. Since that time millions of women have benefited from access to free, safe and legal abortion - lives have undoubtedly been saved and transformed.

Women, who generally had very limited access to reliable contraception, were forced to take desperate measures to terminate unwanted pregnancies. They bought unidentified and often poisonous substances, attempted to self-abort using household objects, or visited 'backstreet' establishments for procedures often carried out by people with no medical qualifications.

Abortion was the leading cause of maternal deaths with hundreds dying each year and 35,000 treated by the NHS for often life-changing complications.

The pressure for legalisation of abortion partly came from growing concern about these backstreet abortions and their consequences. But it was also a reflection of wider social changes and struggles that were taking place.

It's no coincidence that many other social reforms, including of particular benefit to women, took place at a similar time. The 1969 Divorce Reform Act made it easier to obtain a divorce. The 1970 Equal Pay Act made it illegal to treat men and women employees differently in terms of pay or terms and conditions. The 1967 Sexual Offences Act decriminalised homosexuality to some degree.

Major changes, such as a ballooning of the number of women in the workforce, were taking place which drove a transformation in social attitudes. Around the world masses of people protested against the Vietnam War, for civil rights for black people in the US and for improved wages and conditions.

These things both increased women's expectations of what life could be like and showed that collective action, particularly through trade unions, strikes and mass protests, was the best way to achieve things.

In many ways the law had been left behind reality and behind social attitudes. For example, the 'sexual revolution' of the 1960s and availability of the contraceptive pill had begun to transform many people's view of sex outside marriage.

It's thought that 10,000 abortions a year were carried out by qualified doctors prior to the 1967 Act being passed. Recognising the devastating impact of unwanted pregnancies, they chose to risk criminal prosecution and were prepared to defend their actions in court if necessary. In 1938, for example, Doctor Aleck Bourne admitted to having performed an abortion for a 14-year-old who was suicidal after becoming pregnant as a result of rape. He successfully argued that this was a life-threatening situation, and that this was covered by the existing law.

There were and are still major problems with the Abortion Act. Most notably, the reforms were never extended to Northern Ireland. Outrageously women there still don't have access to abortion in the vast majority of cases and are forced to continue with unwanted pregnancies, obtain abortion pills illegally or raise the money to travel to Britain for the procedure.

Even in Britain the law is lacking. The need for two doctors to agree that a woman should have the abortion is needlessly bureaucratic and can lead to damaging delays.

A problem from the beginning was that extremely insufficient services were allocated to meet demand. This means that it is still the case that half of all NHS-funded abortions are carried out by private or voluntary sector providers.

No single law can offer people complete choice over when and whether to have children - where women neither feel they have to carry a pregnancy to term if they don't want to or that they have to terminate a pregnancy that they would otherwise like to continue with.

But regardless of these limitations, the 1967 Abortion Act remains a huge and important step forward for women and the right to choose.

Around the world illegal abortions still result in 70,000 deaths a year. So 50 years on from 1967, it's vital to maintain the understanding of the need for a united struggle for social reforms and for the labour and trade union movement to take up the demands of oppressed groups.

Ireland: fighting to win the right to choose 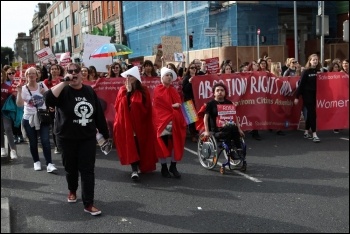 Ireland: Fighting to win the right to choose, photo delightmediagroup   (Click to enlarge)

On 28 October 2012, the barbarity of the Irish state's attempt to ban abortion was exposed. But five years on from the death of Savita Halappanavar after she requested and was denied a termination while having a miscarriage, the Irish political establishment is still dragging its heels.

Irish abortion has traditionally been exported to UK abortion clinics where approximately ten Irish addresses are given every day, but sick women like Savita are unable to make such a journey.

The Irish pro-choice movement has been organising and protesting for the repeal of the Eighth Amendment, the constitutional ban on abortion, before and since then and has significantly grown in the last year. Socialist feminist group Rosa, in which Socialist Party members participate, has been to the fore in calling not for incremental change but full abortion rights.

The Strike 4 Repeal saw thousands of mainly young women pour onto the streets on International Women's Day this year calling for a referendum to repeal the Eighth Amendment and last month we saw over 30,000 at the March for Choice. In opinion polls, 68% say they trust women when they say they need an abortion.

The Citizens' Assembly - an advisory body of 100 people - was set up by the government in an attempt to distance itself from the issue of abortion while bowing somewhat to the pressure to do something.

It was deliberately drawn out to delay progress and excluded anyone who had ever made a public statement for or against abortion, which resulted in one member being replaced after wearing a pro-choice badge to the first meeting.

However, as the assembly discussed the issue and asked questions of the various experts, the members were convinced that the law must be changed not just for the 'hard cases' but to ensure the right to choose as the only way to ensure equality of access for working class, poor and migrant women.

It recommended broad changes to the law including abortion without restriction up to 12 weeks and in later pregnancy for a variety of specific reasons.

In the days after the Citizens Assembly vote, a senior RTÉ correspondent said the job of the politicians would be to tone down the recommendations to something "palatable" for the electorate.

The Citizens' Assembly's progressive recommendations bear out our experience that ordinary people may have some questions about abortion but are open to being convinced, particularly when exposed to the reality; that abortion happens in every part of the world whether legal or illegal. Irish abortions are later and slightly more complicated because of the delays necessitated by organising travel to a UK clinic and money to pay for the private procedure.

There is now a parliamentary committee discussing the Citizens' Assembly report. Ruth Coppinger, a member of the Irish Socialist Party, has used her position as Solidarity TD (MP) on the committee to broaden the discussion to the reality of abortion as dealt with by the Assembly.

The capitalist establishment favours focusing on one or two "hard cases" in order to excuse a minor change to slightly broader, but by any standard still extremely restrictive, abortion access where, for example, only sexual assault survivors or those with a fatal foetal anomaly diagnosis could access abortion.

A motion proposed by the government chair of the committee "not to retain Eighth Amendment in full" which passed recently could be misunderstood as a victory. But really it marks the extreme conservatism of the establishment. They are still considering preserving some kind of "rights of the unborn" in the constitution.

As the obstetrician Prof Peter Boylan told the committee, the "genie is out of the bottle". Abortion pills Mifepristone and Misoprostol are being sourced online through websites like womenonweb.org and used at home in the first 12 weeks of pregnancy. Our research shows that more than five people a day in Ireland are requesting pills.

The onslaught of austerity on working class women in Ireland has left many without the hundreds or thousands of euros required to travel. Rosa has done a lot of work in highlighting the availability of abortion pills through actions like the Abortion Pill Train and the Bus 4 Repeal where we flouted the law to expose its unworkability.

The government's clumsy attempts to deal with this issue could be misinterpreted as signalling an inevitable change. In reality, nothing will be handed to us that we don't struggle for. It is clear that the political establishment has no intention of granting us our rights.

It's essential that the pro-choice movement mobilises the huge latent support, some of which is consciously waiting for a referendum date to be announced to get involved, to pressure the politicians in the crucial period.

The victory against the attempted introduction of water charges in Ireland shows that politicians can be pressured to change their position if a mass movement is organised. Young people wearing 'repeal' jumpers and marching for choice can become a huge thorn in the side of the political establishment.