25 November is International Day for the Elimination of Violence Against Women.

After over a year of nights in, 'social bubbles' and rainy outdoor seating, it's no wonder the decision to bring back nightclubs and bars has been so popular, especially among the younger generation

'Rape has been decriminalised'. This was a 2019 assessment of a situation where just 1.6% of rapes result in someone being charged. Each year around 128,000 people are victims of rape but only just over 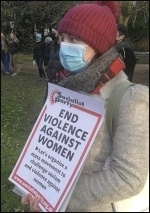 The abduction from a street in south London of Sarah Everard and her subsequent killing has shone a spotlight on the extent of violence, abuse and harassment that so many women face on a regular basis.

Agonising pain, periods that last for a month, birth defects in every one of their children. These are just some of the serious health issues found by the Cumberlege Inquiry which were dismissed by doctors