It's "nepotism not journalism" said one picket. The Bullivant Media National Union of Journalists (NUJ) chapel (branch) were out on their first ever strike on 25-26 August, opposing compulsory redundancies,

The campaign to save Bewdley Fire Station continues to build, with a march and rally planned for Saturday 28 September, starting at 10.30am

Money has been found to secure the future of St John's and Warndon libraries in Worcester.

The third instalment in the campaign to see off the cuts to services at St John's library, Worcester, took place on 20 April when 30 protesters gathered outside the library itself.

The local library in St Johns, Worcester, is under threat of job losses, shorter hours and possible closure, along with another eight across Worcestershire

Worcestershire's Tory county council wants to close nine community libraries, and sack workers and reduce opening hours in at least six others. We say no! Enough is enough!

Letters to the Socialist's editors including the Copeland byelection, benefits, India and pensions.

In Worcestershire, Socialist Party members have played a leading role in a campaign against abuse of NHS staff. 'Betrayed by Their Trust' (BBTT) will have its second annual general meeting in February.

If Labour splits, can Corbyn win? This is what Worcestershire Socialist Party members discussed at our well-attended public meeting on 29 September. Our guest speaker was the Socialist Party's Dave Nellist, former Labour MP.

Some of the mass rallies and meetings backing Jeremy Corbyn for Labour leader.

Worcestershire has been hit time and time again with cuts to its NHS. It's been 16 years since New Labour closed Kidderminster's A&E, last year the Tories and Lib Dems closed the Cookley rehab ward and now the Tories plan to close the GP centre in the Kidderminster hospital. 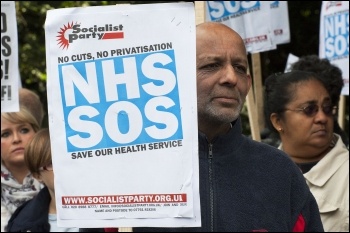 Reverse all cuts and privatisation: The scene: a Medical Incident Officer - a standby doctor normally called upon for major accidents - arrives at Worcestershire Royal Hospital to treat patients who have been waiting for hours, untreated in ambulances outside the hospital

Worcestershire: Is socialism only way of saving NHS?

'Is socialism the only way of saving the NHS?', was the theme of a Socialist Party public meeting of 30 people in Kidderminster on 25 March, writes Workers' struggles and socialism to save the NHS