As lockdown eases, workers' rights must be defended. Employers have been attacking the health and safety measures won by members and their reps. Employers have raised the number of people allowed in shops

"Too little, too late" is ringing in many workers' ears. In my workplace, a food distribution centre, it definitely echoes.

Workers at Tesco Dagenham distribution site are striking over pay from 10pm on Thursday 17 May. Following over a year of negotiations between Tesco and the retail and distribution workers' union Usdaw, bosses have refused to improve their initial offer which was worth less than 3%.

Birmingham council is playing dirty in the ongoing bin dispute

As part of our Saturday stall campaigning on 22 July, Socialist Party members in Birmingham gave out leaflets to raise support for striking Birmingham refuse workers.

A theme of the 2017 general election was insecure and precarious work. International multi-billion pound company Procter and Gamble has a long history of union-busting which creates these conditions

Train guards have faced down bosses at London Midland in a dispute over the use of outsourced security guards on trains. 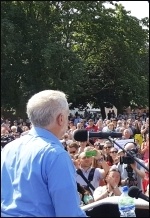 "We have record employment, but also record levels of poverty among those in work... We have to change that" said Jeremy Corbyn