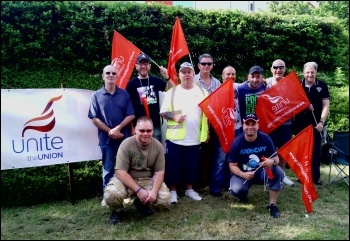 About 1,000 warehouse staff employed by Argos at five distribution centres went on strike today, Friday 4 July, in a dispute over terms and conditions which will mean increased weekend working, adversely impacting on family life.

There is a grim determination to resist the imposition of new contracts and performance management systems among Argos workers in Basildon. The new arrangements combine the worst aspects of 21st century control and monitoring technology with a ruthless determination to sweat the workforce in a way that would not be out of place in the 19th century.

In effect, even permanent, non-agency workers will be on a three month rolling contract, with shift patterns subject to alteration at the management's whim, making it impossible to balance work commitments with family or other commitments - Argos comes first.

A warehouse is a hazardous environment, as it is a space shared by humans on foot and large heavy trucks, lifts, etc. The requirement to meet unrealistic and inhuman performance targets (for instance, to maintain an average walking speed of 3-4 mph on the job, or to be actively meeting performance targets for 85% of the time) will make accidents far more likely.

Unite members on the picket line are fully behind their union's action and are supporting the call to escalate.

Socialist party members in Basildon will be working with union reps to mount a publicity campaign outside Argos stores exposing the exploitative practices of one of our town's major employers. 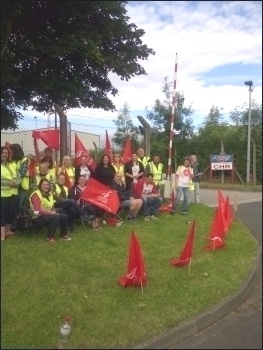 On Friday 4th July, Argos workers at a Wakefield depot took part in the 24-hour strike involving over 1,000 workers across five sites altogether.

The dispute was over terms and conditions which will mean an increase in weekend working for workers on a 24/7 shift pattern.

At the Wakefield depot there was a vibrant and enthusiastic picket of around 30 Argos workers. Workers are not prepared to accept the new terms and conditions being thrust upon them by the company, and are opposing a one-off payment to staff of £2,400 which is wholly inadequate in the face of such disruption to family life.

The union rep for the site commented on the huge amount of support that their struggle has received from the community and other workers. "No one is unaffected by what is going on, the bus drivers have a dispute over pay at the minute and this action will affect other depots as well", he remarked.

He also commented: "If we had known the results of the public sector ballot earlier we would have come out together on the 10th of July", when over one million public sector workers will be striking over pay and the onslaught of local authority cuts. This highlighted a clear desire amongst union members to organise coordinated action against the cuts, austerity and this government.

This fight is not over, and workers are prepared to continue action if this strike does not bring the employer back to the negotiating table.

Friday 4 July was the second day of strike action taken by Unite members in five Argos distribution depots to oppose attacks on their terms and conditions.

Management is trying to force through 12 changes, including compulsory changes to their shift pattern which will affect the work-life balance of workers, especially those with families.

Some workers on the picket line in Magna Park depot, Lutterworth, Leicestershire for example explained that it caused a problem with the access agreements they had to see their children.

They fear that the plan to bring in a new performance management system will make it easier to get rid of workers.

By contrast, in May this year three of the directors were given £1.5 million worth of shares.

Nigel Ruddy, Unite convener at the depot said: "Half the workforce find it difficult to work Saturdays and the shift pattern the company are proposing.

"It also involves splitting rest days when we have a break in our working week. The workforce find this unacceptable and there was an overwhelming vote for action.

"After the last day of action the company proposed an extra £400 on the one-off payment to accept one of the changes - the new testing system - which was rejected by 70%. The strike has been well supported over all five sites".

This version of this article was first posted on the Socialist Party website on 4 July 2014 and may vary slightly from the version subsequently printed in The Socialist.