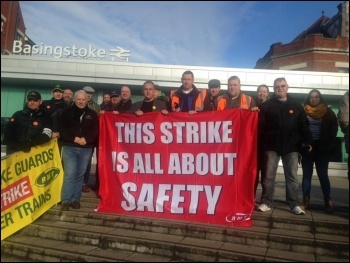 Pickets stretched from London Waterloo all the way to Bournemouth and the Isle of Wight, as the largest rail franchise in the country, South Western Railway, joined other areas in the largest strike action to date against Driver Only Operations.

Strikers massed in large numbers across the network, getting their message out that the RMT wants operators to put 'Safety Before Profit' and ensure the safety critical role of the guard.

Stations were as quiet as the news reports on the strike, showing the impact of the strike action. Leafleting at Southampton central station, passengers took leaflets and showed their sympathy and support for the campaign, stopping to talk about the importance of keeping guards.

Speaking to pickets at Basingstoke, that message was loud and clear:

Significant numbers of RMT drivers were also on the picket lines, and Aslef union members were refusing to cross picket lines and were organising collections for the RMT strike funds.

Discussions are now developing on how to escalate the action after the success of this week if South Western Railways doesn't guarantee the continued role of the guard.

This version of this article was first posted on the Socialist Party website on 10 November 2017 and may vary slightly from the version subsequently printed in The Socialist.