National Shop Stewards' Network (NSSN) supporters once again traveled up from Bristol and Gloucestershire on Tuesday 16th May to bring support and solidarity to BMW workers at the Mini plant in Swindon, writes Matt Carey, Bristol South Socialist Party.

Many strikes and protests are taking place 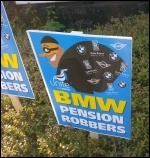 Thousands of workers at the Atomic Weapons Establishment (AWE) were stripped of their defined benefit pension scheme on 1 February by AWE bosses Lockheed Martin, Jacobs and Serco.

It's one world for the super-rich, and another one for the rest of us. We look at the super-rich and their supercars while cycle couriers suffer.

The thoroughly reactionary but entertaining Jeremy Clarkson, on his Top Gear programme's Christmas special, tried to demonstrate that UK vehicle manufacturing was healthier than ever

Working life in a car factory

Steve Bell of Aylesbury Socialist Party recently interviewed a car worker at the BMW plant in Oxford, writes What is your working life like at the moment?.

Government inspectors have published their report on the scandal of the 'Phoenix four' directors who bought MG Rover from BMW in 2000 for £10 and allowed it to collapse in 2005, writes Bill Mullins.

Anger as jobs slashed with an hour's notice

Workers at BMW's Mini plant at Cowley in Oxford reacted in fury when they were given an hour's notice that they were losing their jobs, writes Alison Hill.

SACKED AT an hour's notice! And with no redundancy pay even after years of continuous work. That's what the bosses did to 850 workers at the BMW car plant at Cowley, Oxford.

These sackings typify the plight of workers today in 'casualised Britain' plc. The 850 sacked workers were agency staff who didn't have the same employment rights as permanent workers.

Sack the board, not the workers: TENS OF thousands of workers in the West Midlands face an uncertain future, as behind closed doors administrators - in reality, asset strippers - pick over what Phoenix have left of Rover...

Longbridge: THE ROVER crisis is mainly down to the greed and short-sightedness of the capitalist owners...

The businessmen who bought the BMW car factory in Longbridge, Birmingham and supposedly saved thousands of jobs in the West Midlands, are to be investigated by the House of Commons Trade and Industry Select Committee for their governance of the company, writes Clive Walder, Birmingham Socialist Party.

AS WE go to press, the multinational General Motors has announced the closure of the Vauxhall plant in Luton. This is a massive blow to the thousands of workers and their families in the area, writes Bill Mullins.

TONY BLAIR has said he will "work night and day" to save Rover jobs. This is a turn around from last month when Labour said they were powerless to stop BMW selling the plant to asset-stripping venture...

THE ROVER crisis shows that BMW are typical capitalists, they're double-dealing hypocrites. Rover's last owners were prepared to fiddle the profit and loss accounts to justify whatever they wanted to...

Rover: Where did all the money go?

THE BIG car companies always play one country off against another. BMW threatened to move Rover 75 production to Hungary in 1998 unless the government coughed up £250 million to develop the Longbridge...