Fight against blacklisting in Liverpool

The construction of the new Royal Liverpool hospital is being undertaken by the blacklist using company Carillion. Activists protested against union victimisation.

Just before Parliament closed for the general election, a select committee revealed that the Consulting Association (which provided names of thousands of trade unionists to construction industry bosses, who then blacklisted them) had discussed with companies working in the NHS 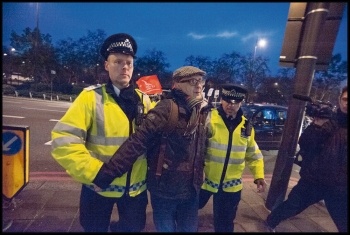 One of the key industrial battles of the last five years has been the struggle of workers in the construction industry for trade union rights and better terms and conditions, writes Neil Cafferky.

"Everyone can help the blacklisting campaign by raising the issue of blacklisting with your MP, prospective candidate, your union branch or local political party."

Metropolitan Police officers this morning (Friday 21st February 2014) attended the London company offices of Sir Robert McAlpine as an arrest warrant was served for Cullum McAlpine for his role in the Consulting Association scandal, reports the Blacklist Support Group

Blacklisting: The TUC has called a day of action against blacklisting on 20 November. They are planning a lobby of Parliament, the Scottish Parliament and the Welsh Assembly as well as a number of other protests 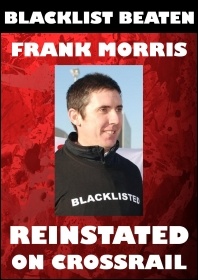 Blacklisted Unite shop steward Frank Morris is returning to work on the Crossrail project. This is a massive victory, not just for Unite but the whole of the trade union movement 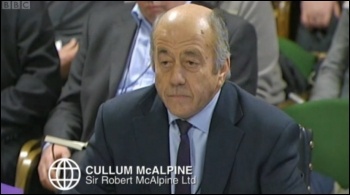 TV review: "Unfortunately there are people in this life who do cause trouble. I can't say whether people on that list caused genuine trouble but certainly I know some of them would have.", writes Neil Cafferky.

George Tapp, who has stood as a TUSC candidate in council elections in Salford, has been hospitalised after being hit by a car while taking part in a protest against blacklisting