Members of PCS in the Ministry of Justice (MoJ) have just concluded a consultation exercise with regard to a new offer and contract called MEP (modernisation employment programme).

Jobcentre Plus has been announced that 17 benefit processing sites and five contact centres will be shut, mostly within 12 months, with the loss of 2,400 jobs...

Thousands of call centre workers supported the strike by the PCS civil service union in the Department for Work and Pensions (DWP) on 18 April over inhuman working conditions and a bad service to benefit claimants... 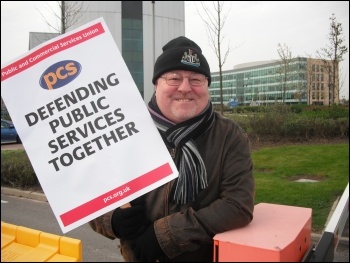 More reports added 19.4.11. Thousands of call centre workers supported the strike by the PCS union in the Department for Work and Pensions (DWP) on 18 April over inhuman working conditions and a bad service to benefit claimants 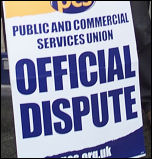 We are not numbers! Jane Aitchison, Department for Work and Pensions (DWP) PCS president, explains why PCS members are striking in all Jobcentre Plus call centres on 18 April

Thousands of Jobcentre Plus (JCP) call centre staff will strike on 18 April after bosses refused to improve working conditions and customer service, the Public and Commercial Services union (PCS) has announced...

As Unemployment figures jumped again, Department for Work and Pensions (DWP) civil servants in the PCS union were taking strike action to provide a decent service to claimants... 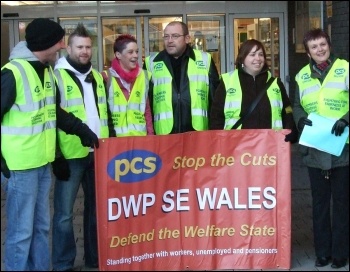 Updated 21/1/11. As unemployment figures jumped again, Department for Work and Pensions (DWP) civil servants in the PCS union were taking strike action to provide a decent service to claimants

The callous cutting of NHS Direct

FOR SOME months now staff at NHS Direct have known we were getting a new phone number. It has been seen as a positive move as reports suggested that three-quarters of people in England did not know the...

Civil servants on strike on 8 and 9 March: The government is going ahead with its plans to rip up the civil service compensation scheme (redundancy protection pay for civil servants), writes Nick Parker, a PCS member.

I was interested to read the recent article in The Socialist by John McInally about the work my union PCS is doing to improve working conditions in call centres in the civil service, writes Paul Newton, PCS rep. 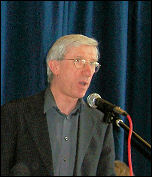 THE PROLIFERATION of call centres within the civil service and related bodies is rooted in the government's pro-market 'reform and modernisation' programme of cuts in investment, jobs and conditions and office closures and privatisation.

As John McInally, national vice-president of the PCS (Public and Commercial Services Union - pc) explains, this is not "efficiency" as they claim but an ill-conceived strategy to deliver public services on the cheap.

There are 5,500 UK call centres employing 400,000 workers, many of whom have no union representation and work in appalling conditions. These workers are now threatened with "off-shoring" or "out-sourcing"...

BRITISH TELECOMM (BT) has been involved for over a year now in reducing the number of call centres in the UK. This has been managed through reskilling and relocating people, writes Judy Griffiths, national assistant secretary (clerical) Communication Workers Union (CWU), personal capacity.