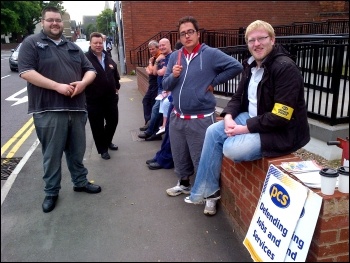 Jobcentre staff who deal with calls from people entitled to benefits are striking today over oppressive working conditions and unrealistic targets.

More than 6,000 PCS members in 32 call centres in England, Scotland and Wales are reigniting industrial action first taken last year against draconian conditions that prevent them from providing the kind of service callers require and deserve.

Despite negotiations and a review of services designed to ease the excessive target-driven culture, jobcentre management is still refusing to give staff the flexibility they need to deal with enquiries fully and professionally. A shortage of staff is also adding to problems.

Some flexibility to the targets allowed for call handling times has been introduced, but set at arbitrary levels that, worryingly, favour shorter calls over ones that might take a bit longer.

From a PCS press release

Pickets described the "heinous" regime of bullying and psychological pressure on staff by a management determined to drive staff out of the door.

In the last 18 months, nearly 200 of what used to be over 600 jobs at the site have been lost. The extra workload has all been dumped on the remaining staff.

Further strikes will be well supported, as was the Socialist Party's petition for a Trade Unionist and Socialist Coalition candidate at the Manchester Central byelection this autumn. 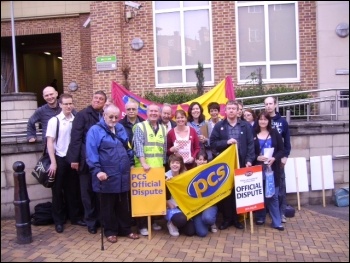 Over 200 PCS members were on strike at the Derby contact centre today with a well attended picket line.

Staff were describing the worsening conditions they face in call centres. Also, the lack of willingness from management to abide by agreements won by previous strike action.

Strikers were determined to take further action to win this dispute but also agreed with the Socialist Party demand that we need a 24-hour general strike against all cuts and privatisation.

Despite management organising all-staff propaganda meetings to attack the union position, and censorship of union campaign posters that were banned from offices, the overwhelming majority of PCS members at Lincoln Contact Centre supported today's strike over staffing, conditions and privatisation.

Two PCS members were turned away this morning, demonstrating the importance of active picketing to win over members on the day.

Workers don't take strike action lightly, but the only time that call centres have improved as workplaces has been through strike action.

Let's hope today's show of strength forces management to make real improvements to end this dispute so we can focus on supporting some of the most vulnerable people in society.