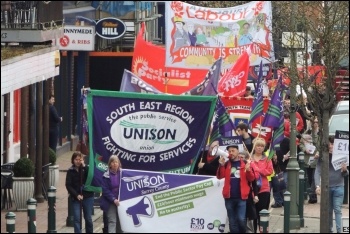 Trade unionists and campaigners rallying for pay at Runnymede in Surrey, photo by Surrey Unison   (Click to enlarge)

In one of the best local demos for many years, Surrey County Unison members turned out, alongside their sisters and brothers from across the South East region, to protest in the constituency of Philip Hammond MP.

The rally was symbolically held at the site of the signing of the Magna Carta over 800 years ago on the banks of the River Thames at Runnymede. Unison members were joined by Fire Brigades Union, RMT transport union and Unite the Union banners as well as several local Labour Party activists. The Socialist Party in Unison was well represented with dozens of activists, banners and placards and around half of the day's speakers.

I outlined why our Unison branch called the demo - with 30% of children in some parts of Surrey living below the poverty line and foodbank use among working parents up fourfold in the last four years. It is impossible for the average worker to get somewhere decent to live.

One recent report showed that you would need to earn £85 an hour to afford to buy the average Surrey home. The protest's call for a £10-an-hour minimum wage is a modest step towards fair wages for Surrey council staff and other public sector workers.

Surrey council has imposed an effective pay freeze for nearly a decade and one of the knock-on effects of government austerity is that less and less money is available to pay those community sector companies who have picked up all the outsourced work like home care.

One charity in Surrey has had its local authority funding slashed to the point where it has made pay cuts of £2,000 to £3,000 a year in its care workers' salaries. Two Unison reps from this sector proudly carried the branch banner at the front of the demo. 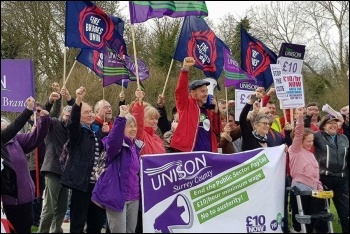 Trade unionists and campaigners rallying for pay at Runnymede in Surrey, photo by Surrey Unison   (Click to enlarge)

The mood was buoyant but frustrated. Speaker after speaker called for serious coordinated national action on pay.

This protest could not have come at a better time with all the capitulations over pay going on at the moment. A clear majority of the best activists from right across the region were there and the day was a huge success.

I said: "We will use the mood here and the photos from the day to build our local campaigns on public sector pay. We can and will achieve a £10-an-hour minimum wage rate in Surrey and beyond. We will continue to fight for a fair local pay increase this year - even if the unions at national level don't appear to be fighting back."

Around £70 was collected towards a May Day greeting in the Socialist from all those attending.