The 'Tricoya Trinity Project' at Saltend Chemicals Park is subject to the 'National Agreement for the Engineering Construction Industry' (NAECI) trade union terms, also known as the 'Blue Book'. The NAECI and local union agreements say bosses must employ two senior shop stewards on the job, one each from general unions Unite and GMB.

But construction firm Fabricon is refusing to abide by the agreements. The Socialist spoke to plater and Socialist Party member Keith Gibson, who bosses have refused to employ as senior steward for the GMB. 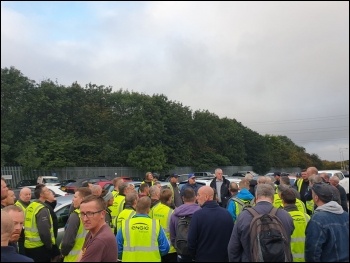 "We've gone through the NAECI grievance procedures for several months to try to get Fabricon to take on two senior stewards. I'm a plater, and I've been put forward as the senior steward by the GMB, and Paul Tattersfield, an electrician, was put forward by Unite.

The company has used several excuses. One was that the job was not going to be as big as they expected. Initially, the job was to have 121 workers; now it's just 60. But nowhere in the Blue Book does it give a numerical figure - the agreement is simply to employ two senior stewards.

They've even gone down the road of making a 'compromise' proposal to the unions, of taking two workers on in their respective trades and then letting them decide between themselves who is the senior steward.

But this breaches both the Naeci and the local agreement. And taking on a plater and electrician that way would breach equal opportunities too.

Another excuse was that they weren't employing any platers so couldn't take me on. The straw that broke the camel's back was that I heard on the grapevine they're taking on five platers and starting a night shift this week! So the reason they've not taken me on is clearly that I've been blacklisted.

The company's line was that there would be a meeting about this on 7 October with officials from both unions. But what they should have done if they're increasing the workforce is speak to the unions first about hours and manning levels.

They've ridden roughshod over that part of the agreement too. They want to hold the meeting late so they can say to us they're fully manned up and can't take on another plater! It's blatant blacklisting.

It's now all come to a head. I went down to see the 60 lads working on the site this morning (24 September). I explained to them we've tried everything through the official procedures to bring the company to book.

I appealed to them to take some form of action - not in defence of me, but in defence of the union agreement. If we're in breach, they're on at the union straight away! If we don't stand up against the bosses' breaches now, it will go onto the next job.

They took a vote. It was overwhelming in favour of strike action. The lads say this has been coming for a long time. So they've walked off the job. Six Hull Socialist Party members and trade unionists came down to support the picket line."