The pressure is growing on the 'Big 7' construction companies who want to withdraw from the Joint Industry Board agreement and impose the new BESNA contracts which will cut workers' pay by up to 35%...

Siteworker leaflet: Balfour Beatty (BBES) ballot - The Truth - Why you should vote for the strike

The pressure is building on the 'Big 7'
construction companies who want to
withdraw from the JIB agreement and impose
the new BESNA contracts which will cut pay
by up to 35%. Electricians all over the country
are fighting back. Last week saw walkouts
and stoppages at many sites, including
Corus on Teesside, Ratcliffe and West Burton
power stations, Saltend and Farringdon in
London. 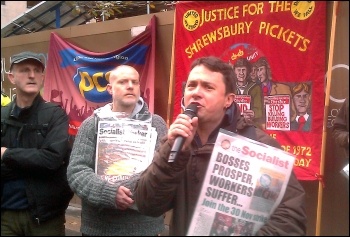 Emboldened by the construction electricians' protest in London on 10 November, around 200 sparks turned up at Corus Steel on Teesside on 14 November, writes Elaine Brunskill. 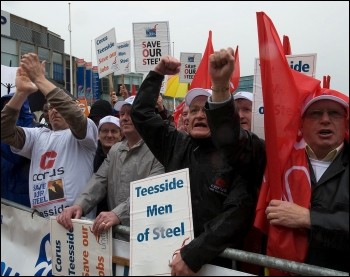 The sorry saga of Corus steel

The recent sale by Corus of the steel plant on Teesside to the Thai company SSI is welcome news but in reality the situation should never have got to this stage, writes A socialist steel worker.

IN MIDDLESBROUGH over one-third of jobs are in the public sector following the loss of heavy industries...

Les Bayliss, right-wing candidate for Unite general secretary, is claiming in an email circular that the sale of Corus' Teesside plant to the Thai steel maker SSI is proof that quiet lobbying by union officials, not militant trade unionism, is the way to protect jobs in manufacturing, writes Socialist members of Unite.

Rich just carry on getting richer

MAJOR SHAREHOLDERS in HSBC will look forward to big dividends as Britain's biggest bank saw its profits almost double to £7.2 billion over the six months up to June...

Anger on Teesside over Corus closure

AS THE process of shutting down the blast furnace at Teesside's Corus steel plant began, hundreds of steelworkers, their families and people from the local community turned out, writes Elaine Brunskill.

There is a heavy cloud hanging over Teesside but it has nothing to do with the worst snow for fifty years, writes Ed Hamilton, Teeside Socialist Party.

Over 30 people turned up to the Northern Shop Stewards Network public meeting in Middlesborough over the Closure of Corus steel plant, demanding "Defend Every Job! Nationalise Corus Steel!"...

Youth Fight for Jobs campaigners speak out on Corus closure

Paul Phillips, 21, Northern regional organiser of Youth Fight for Jobs said: "It is obvious that this government is not serious about safeguarding jobs...

THE CORUS steel firm has angered steelworkers and the people of Teesside in north-east England by announcing plans to cut 1,700 jobs...

Corus steel closure: 'Bail out our jobs, not greedy bankers'

Workers in Teesside are shocked and outraged at the news that the Corus steel plant in Redcar is to close by the end of January, with the loss of 1,700 jobs, writes Ed Hamilton, Teesside Socialist Party.

Youth Fight for Jobs today have been out campaigning in Teesside against the closure of the Steel Makers Factory Crous which will result in 1,700 jobs cuts...

Steelworkers get organised and score a victory over bonus payments

At the end of November Corus steelworkers will harvest the fruits of victory when they receive two bonus payments in one pay packet, writes By a steelworker.

Around 200 delegates from the four main steel unions: Community, Unite, SIMA and GMB gathered at TUC Congress house last week to decide a response to the announcement by Corus to close the British Steel pension scheme to new entrants, writes A steelworker.

After the fantastic support given to the Save Our Steel march at Redcar on 18 July, thoughts turned towards developing the solidarity of the steelworkers into a national campaign, writes A Corus worker.