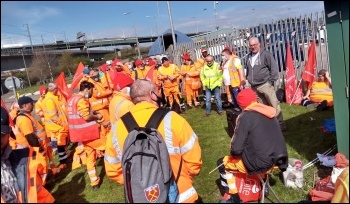 Greenwich Council housing maintenance staff have returned a thumping 97% 'yes' vote for strike action in a ballot over plans to slash wages by up to £20,000

On all six sites, workers have received a lot of support and solidarity

Council workers across all services in Tower Hamlets, east London, have been on strike against attacks on their terms and conditions.

The third instalment in the campaign to see off the cuts to services at St John's library, Worcester, took place on 20 April when 30 protesters gathered outside the library itself.

Workers for Kingstown Works Ltd (KWL) in Hull have started a campaign to protect their sick pay scheme with a lobby of Hull North constituency Labour Party (CLP).

Glasgow council workers made history by striking for equal pay

Reading Borough Council plans to privatise many of its key services. Bins, parks, road maintenance, housing benefit payments and council tax support are all at risk.