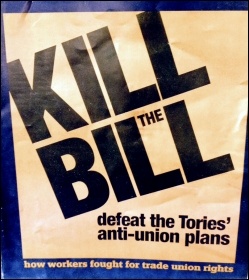 The Tories' anti-trade union bill is having its third and final reading in the House of Commons. If it passes, it will then go to the House of Lords and could be law as early as January or even December.

But if the Tories do win the vote, the fight against the bill must really be stepped up. Cameron will fully expect the Lords to accept the bill but their rebellion over tax credits was a reminder that even this undemocratic anti-working class institution can be forced under pressure to defy the government.

We have to prepare for these vicious proposals becoming law and the best way to do that is for the unions to immediately launch a real mass mobilisation over the next few months as the bill passes through the second chamber.

There should be an emergency TUC congress called, just as there was in early 1971 when the Tory government of Edward Heath brought in their Industrial Relations Bill, which provoked the original 'Kill the Bill' campaign. Any such congress should be widened out to union executives and thousands of shop stewards and reps, who will be in the firing line of the new laws.

Such a congress should discuss how the unions resist the new anti-union laws.

What would happen if a union was fined if it took action despite not quite reaching the new higher undemocratic voting thresholds? Or if a shop steward was arrested under the 'picket supervisor' section? Any such action should be the trigger for mass solidarity action and mass pickets.

In 1972, five London dockers who were imprisoned in Pentonville prison were freed after mass walkouts that rapidly built to general strike proportions forcing the government to 'discover' the official solicitor, virtually unknown up to that point, to release them.

In the summer of 1984, the Labour Party Young Socialists led by Militant supporters (now Socialist Party) left their national summer camp in the Forest of Dean to surround the South Wales National Union of Mineworkers HQ in Pontypridd when the union was threatened with sequestration of their funds.

But the ground has to be prepared. It will be necessary to build pressure from the rank and file of the unions. That's why local #KillTheBill committees have to be built in every area through trades councils, union branches, shop stewards committees, anti-cuts groups and organisations such as the National Shop Stewards Network (NSSN).

The left unions have to step into the vacuum to also pressure the TUC and the big unions.

It is therefore extremely welcome that the Trade Union Co-ordinating Group (TUCG) of left unions called the protest outside Parliament on the evening of 10 November.

The NSSN is working closely with the TUCG, which include the likes of civil servants union PCS, transport union RMT, firefighters union FBU, POA who represent prison officers and the BFAWU bakers' union.

The TUCG has also called a rally on 21 November in London billed as: 'After Corbyn's victory, build the fight against austerity'.

It will be essential to connect the trade union bill with the continuing vicious cuts, to explain why the Tories are pressing ahead with their attacks on the unions and why they have to be defeated.

That's why the day of Osborne's Autumn Statement should be a national day of action against the cuts and the bill.