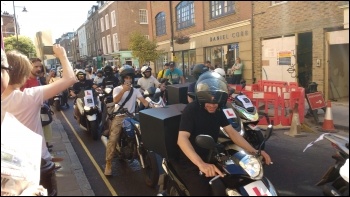 "We are free, don't work for three", chanted angry UberEats drivers after storming the courtyard in front of the offices of the food app riding mopeds and bikes on 26 August.

They were referring to the £3.22 that the company want to pay drivers for each delivery instead of a basic wage. Workers are demanding the London Living Wage.

"Every day when we wake up we don't know what we're going to be paid, we have to rely on tips which is totally up to the customer. I ride a motorbike and can get into accidents so I have to pay £108 out of my pocket on insurance alone," one driver told the Socialist.

UberEats claim drivers can earn £10 an hour at present but most drivers currently earn less than the minimum wage. One driver showed me his phone to show that he earned just £34 during a ten hour shift.

As drivers are technically self-employed the company can get around minimum wage legislation, using modern technology to implement Victorian working conditions.

Similarly, over 100 couriers at rival firm Deliveroo took strike action over proposed changes to the way in which they're paid, meaning they would only be paid £3.75 a delivery. 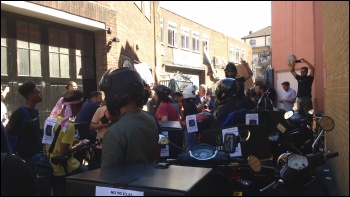 The drivers at the protest elected a delegation of five who were eventually allowed in, along with a rep from the IWGB union, to talk to management but they came back out minutes later after bosses insisted on only talking to workers one-on-one. Security appeared as the protest resumed and tried to buy off the workers with ice creams which were promptly refused and thrown back.

As the protest started to disperse, drivers were told that management were speaking to Channel 4 news around the corner from the office and proceeded to interrupt the interview demanding talks, which bosses ignored. The exchange was caught on camera and made the evening news.

Instead of talking to workers, the company has instead sacked one of the drivers, Imran Siddiqui, clearly victimised due to his role in organising workers and leading the protest.

Strike action is now threatened and a petition demanding Siddiqui's reinstatement can be signed here: http://tinyurl.com/uberEATSpetition