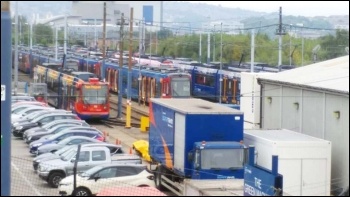 "Liberating" is how one Unite union member described his first day on strike against Supertram's "derisory" pay offer.

Around 180 drivers and conductors, all members of Unite, are taking strike action today (9 July) and on 12 July, the first strikes in the 24 years since Supertram first operated.

"They never thought we'd actually go on strike" said one picket. But it's not just about pay, it's about how management treats its staff. One striker said: "There's more managers than trams and there's 32 of them."

Conductors are on around £18,000 a year and drivers around £23,000, still less than the national average wage and much less than comparable train and tube drivers.

Unite submitted a 50p an hour one year pay claim. Supertram offered 26p in Year 1, 26p in Year 2, and a Consumer Price Index rise in Year 3 of a three year deal. This was unanimously rejected and 91% of union members voted to strike.

The strike has been solid, hardly any staff have gone in, with few trams running. Stagecoach bus drivers, also Unite members, refused to drive the replacement bus services so the bosses have had to bring in managers and buses from outside South Yorkshire.

Their scab buses say "Magic bus" on the livery but they haven't conjured up many passengers!

After overwhelmingly rejecting a second "smoke and mirrors" pay offer, Unite named a further three days of strike action to follow on 20-22 July which is the weekend of Sheffield's 'Tramlines' music festival.

As one striker said: "Tramlines without trams!" With 40,000 extra visitors to the city expected, Supertram stands to lose hundreds of thousands of pounds.

Unite expects that the strength of the strikes and threat of lost revenue will force the company to improve its offer.

This version of this article was first posted on the Socialist Party website on 9 July 2018 and may vary slightly from the version subsequently printed in The Socialist.