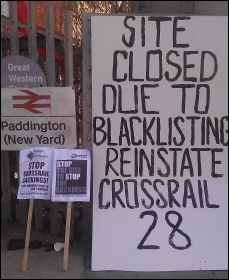 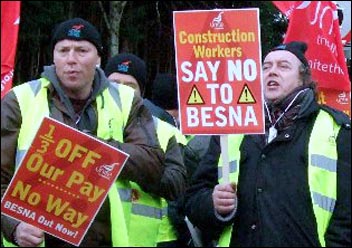 Construction electricians gained a tremendous victory against the multinational Balfour Beatty and six other building contractors, photo by SP Wales

The tremendous victory of construction electricians against the multinational Balfour Beatty and six other building contractors, confirmed yesterday, is a hugely significant moment for these workers and the rest of the union movement

The BESNA struggle is over - all the remaining companies have capitulated! It's a victory for the whole union movement.

Sparks protest at Conoco and solidarity with Jet tanker drivers

Electricians from West Burton power station in Nottinghamshire and BP Saltend in Hull took strike action on Wednesday 25 January against the new Besna contracts being imposed on them, writes Alistair Tice.

Sweetheart stitch-ups in the electrical industry: A spark's history of the Joint Industry Board

Electricians are currently fighting a 35% pay cut and the deskilling of their trade, being imposed by seven companies using the new "Besna" contracts, writes Eddy Current.

Electricians from across England, Scotland and Wales met in Birmingham to plan the next steps for the fight in defence of pay rates and their skilled trade

Construction electricians brought their campaign of defiance to the home of one of the 'Dirty Seven' contractors in London on 23 November, writes Rob Williams, National Shop Stewards Network chair.

Construction electricians entered the next phase of their battle to maintain terms and conditions following their national day of action on 9 November, writes Kevin Parslow

SINCE LAST April, three sacked electricians have protested against the employers on the major Manchester Royal Infirmary (MRI) construction site...

ELECTRICIANS SACKED by DAF Electrical remain on strike, nearly a year after they walked out in defence of their union reps. DAF attempted to break the union but has dismally failed...