Seventh day of national strike action at Fujitsu IT 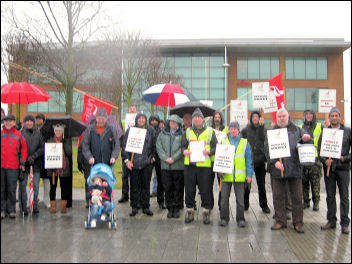 It's not often you see Information Technology (IT) workers marching round a traffic island brandishing a Unite flag in one hand and a "Honk Your Horn" placard in the other! The seventh day of national strike action at Fujitsu IT saw the largest and liveliest Manchester pickets so far.

Fujitsu made record profits last year, dishing out a small fortune to the shareholders and £1.6m to two ex-bosses! This is a profitable company using the recession as an excuse to hammer conditions, pay and employment.

Attempts to make 1,200 staff redundant have been watered down, and the effective 20% pay cut for 3,000 Defined Benefit pension scheme members reduced to 15%! Rightly, workers see these as tokens, not a willingness to negotiate or address the attacks which led to the dispute late last year and not enough to settle for.

Seventy staff remain at risk of compulsory redundancy, at a time when a new government contract has just been signed worth £hundreds of millions, and Fujitsu is using agency staff to cover shortfalls created by previous voluntary redundancies! It also appears they may be fiddling the voluntary redundancies to make more job losses.

Defined-benefit pension scheme members offered a 5% pay increase in return for accepting a 20% effective pay cut know that still leaves them 15% worse off! There is no movement from the company on last year's pay freeze, but instead indications that Fujitsu may seek to continue this through 2010 meaning two years of real-terms pay cuts for 11,000 workers.

The plan of strike action continues through to next month, with strikes on 29th January and 1st, 5th and 8th February.

This gives time to continue bringing on board wider sections of Fujitsu workers, both organised and unorganised, and put the company under huge pressure.

It is possible that Fujitsu may beat a retreat with the new contract signed. It is equally possible they may use this to ramp up casualisation of the workforce and payouts for the shareholders.

Strong strike action and protests built around strike days have made Fujitsu offer token measures. Further action can make them back down.

Unite has organised parliamentary lobbies and other actions as well as the strikes. The next step for Unite nationally, and for the United Left in Unite, is to mobilise more active support.

Getting Fujitsu strikers to speak at Unite branches and workplaces, as well as collections for the strike fund, can prepare for public protests and demonstrations.

Trade unionists in and beyond Unite should discuss with strikers about whether to lobby the organisations which have contracts with Fujitsu, including high street names and large parts of the public sector.

The faster that wider support is mobilised, then the faster a victory could be secured in Britain's first national IT strike.

See www.ourunion.org.uk for news and how you can support the dispute. Send messages of support c/o John Wood, 301 Bolton Road, BL8 2NZ and trade union branch donations to the same address, made payable to "Manchester IT Workers Group".