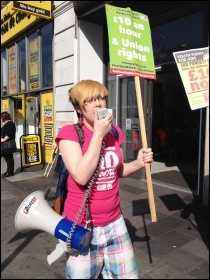 In response to the new so-called 'living wage' the bosses are looking for ways to claw back the pennies it will cost them. Corporation tax-avoiding Caffè Nero has blamed the National Living Wage for its decision to scrap free staff lunches. Despite making millions of pounds in the last year the company, which has not paid corporation tax since 2007, told staff they would be forced to cough up 35% of the cost of their lunchtime panini. One staff member, who didn't want to be named, told BuzzFeed News the move was "ridiculous". She said: "We work for them, we make the money for them, and we're always understaffed. On top of everything, they don't give you food anymore."

Meanwhile, two Topshop cleaners who campaigned against their poverty wages have been suspended from their jobs at the chain's flagship Oxford Circus store in London. One of the cleaners, Maria Susana Benavidez Guaman, used a Change.org petition to campaign against "poverty wages" calling for "a living wage so I can provide a decent life for me and my family". She was asking for a pay rise from £7.50 an hour to £9.40 an hour. There will be a protest against their victimisation, organised by United Voices of the World trade union, at 4.30pm on 9 April at Topshop on Oxford Street.

The Fast Food Rights campaign for £10 an hour and union rights also continues on 14 April with an international day of action with protests planned in Wakefield and other UK towns and cities, for more information see fastfoodrights.wordpress.com and youthfightforjobs.com

Transport union the RMT will strike again at Kings Cross on 14 April in their fight with ISS on the Virgin East Coast contract. The RMT accused global facilities giant ISS of failing to take staff concerns seriously and have confirmed that a further 24-hour strike will kick off on the Virgin East Coast contract at Kings Cross. RMT has also demanded that Virgin, which holds the East Coast franchise, intervene with its contractors to end what the union describes as a "pay and conditions scandal at one of Europe's busiest railway stations." Also, the next 24-hour strikes on London Underground's Piccadilly Line against "bullying, harassment and intimidation" take place on 19-20 April and 21-22 April.