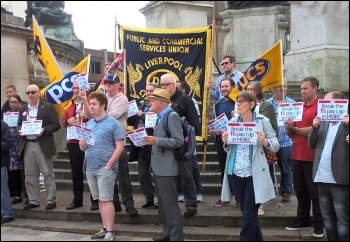 Revenue and Customs (HMRC) management's business case for pay linked to contract changes has been agreed by the Treasury. This would be a multi-year deal, so, if accepted, HMRC staff would not be part of the public sector pay freeze. But this would be on the basis of detrimental changes to hard won terms and conditions - which isn't a pay rise.

The talks were announced to great fanfare on 27 July. Management said that it would take a few weeks to finalise talks with unions. In fact it appears talks could go on until 2021.

Over the last decade, members have seen real-terms pay cuts, while paying more for their pension. Changes to tax on pensions have caused members' net pay to stagnate. In order to recover the position in pay, members shouldn't be expected to accept detrimental changes to terms and conditions.

The talks have been taking place behind closed doors, with only the negotiators knowing what is being discussed. Socialist Party members in HMRC have consistently argued that union negotiators should resist the pressure of talks behind closed doors, designed to exclude members from the process so the pressure of tens of thousands of members can't be mobilised during negotiations.

This makes it difficult to consult with members and to organise a response when the final terms of a deal are on the table. What is dangerous for our union, PCS, is when the employer's desire to reduce member participation becomes mirrored in the attitudes of the union's leadership, as with the national union's supposed pay campaign. This has degenerated to the point that member participation amounts to signing and sharing a petition. This can hardly be described as a national campaign to fight for a decent pay rise.

If the Revenue and Customs PCS group executive thinks members should reject HMRC's offer, members must be kept involved at every stage, so they understand why the deal on offer is a bad one and reject it in a ballot.

Socialist Party members have argued for the following:

Putting aside the fact a petition is not a campaign, full support should be given by the national union to help HMRC members win a pay rise without detrimental changes to terms and conditions, as a step towards all members of the union getting the full demand of 10%. This means engaging with members on the talks now, rather than keeping members in the dark until it's too late to organise. Campaigning on pay alone is not the way forward. There are many attacks on our members we need to build a fightback against!