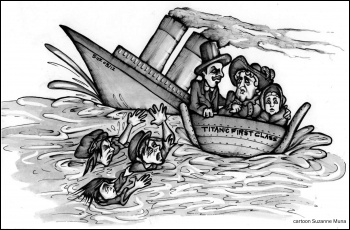 The sinking of the Titanic on 15 April 1912 during its maiden voyage, with the loss of over 1,500 lives, remains one of the worst peacetime maritime disasters. The 100th anniversary of the disaster will be marked by many events most of which will hide the real picture of the society it exposed.

The Titanic, its construction, the sinking and the aftermath revealed all the huge divisions that existed in society not just in lifestyle but in the different value placed on different lives. It was a disaster not of chance but of a society driven by serving the interests of the rich and the profits of the shipping industry with little care for the lives of working people

The Titanic was the biggest ship of its day. It represented the height of luxury afloat. On board were some of the world's richest people. Yet life for its crew and third class passengers was far from this.

While the 700 first class passengers enjoyed the fine restaurants, swimming pool and Turkish Baths, the 1,000 third class passengers shared two bathrooms, one for women, one for men. Even the toilets reflected the class divisions, iron for third class, porcelain for second and marble for the millionaires.

No surprise then that such a gap would exist between the crew; the captain was paid £1,250 a year, a radio operator £48 a year, a fireman £5 a month and a steward £3 a month. While the captain and officers were salaried, the crew were signed off after each voyage. If a ship was ashore for two or three weeks the crew had no work.

Life on the Titanic reflected the chasm that divided society on land in the years running up to World War One.

Built in Belfast at the massive Harland and Wolff shipyard by an army of over 15,000 workers, then as now such projects had a human cost many would like us to ignore. Over 245 injuries were recorded with six people killed: not accidents but products of the drive for profits over safety, then as now, fought out between the bosses and the unions.

In the disaster itself the self-interest of the super-rich and their callous disregard for the rest of society was revealed for all to see. Tragically less than a third in total survived. While 37% of first class passengers died, 74% of third class passengers and 78% of the crew lost their lives.

Yet the calamity that such a ship set sail with only enough lifeboats for a third of the crew and passengers reflected not some mishap but the pressures for profit and to accommodate the needs of the first class passengers. Those left on board were thrown into the icy waters and died in minutes. Just 13 were pulled from the sea into half-filled lifeboats. Crew training had been minimal and cost many their lives.

Southampton paid a heavy price. Over 50% of the crew were from Hampshire, the rest mainly from Liverpool who had moved south. It had a massive impact in Southampton. Every street in the city lost someone. At a time when there were no benefits, families were cast into poverty.

Much is trumpeted about the "lessons learnt". But the inquiries held were seen by many as a whitewash. Not one third class passenger was called to give evidence. Laws and regulations were to change but only after pressure from striking unions. Just days after the Titanic sank, the crew of another White Star Line ship, the Olympic, took strike action to force the company to increase the number of lifeboats.

The British Seafarers' Union had to fight for its 4,000 members to have better pay, shorter hours, decent sleep aboard with better conditions and accommodation.

Follow the reams of coverage of this anniversary and most of this will be glossed over: not by accident but to hide the brutal reality from society. Tasteless razzamatazz and profiteering surrounds this anniversary.

Just last week a first class menu from the Titanic was sold at auction for £76,000. The auctioneer commented: "What we have to consider is that the Titanic was regarded as the finest restaurant afloat and this does illustrate that point. There are over 40 different options for one lunch."

On 10 April, the 100th anniversary of the Titanic's launch, Tory council leader Royston Smith will open the Titanic Museum in Southampton. Built to show a sanitised 'history' of the Titanic for profit, ironically the council couldn't find a private operator willing to take it on.

Southampton council and its leader have gained recent infamy for dishing out savage pay cuts to council workers who have fought back magnificently with months of strikes and demonstrations. The £7 million cut from the wage bill has financed this biased museum project. In the current economic crisis over 7,000 people sign on and over 6,000 children live in poverty in Southampton.

The best tribute to those who lost their lives and the families who were affected would be to defeat the austerity agenda of Southampton Tories today and fight to build a mass movement to ensure a decent future for working people who continue to be exploited in the shipping industry and the city as a whole.

Candidates for the Trade Union and Socialist Coalition are standing candidates across the city in May with this message booming out loud and clear.

The world cruise industry in 2008 was estimated to be a $20 billion market offering mega-profits to operators. In the UK cruise revenues for 2011 were £2.4 billion, with 1.5 million passengers coming through Southampton. Directly and indirectly it employs thousands of people, but remains an industry of casualised and low-paid employment.

In January the RMT transport union reported: "At the moment the seafaring ratings working on these vessels are drawn from a multitude of nationalities usually on very low pay and conditions. While we are aware individual companies argue that the crews make a significant part of their money through gratuities RMT has anecdotal evidence of a widespread disregard for the welfare of crews and the safety of vessels."

The recent Costa Concordia disaster revealed how little has changed since the Titanic disaster, with two subsequent incidents in the Indian Ocean and the Phillipines.

While criticism of the ship's captain has filled the headlines, rumours about company policy have grown. Beniamino Deidda, the chief prosecutor of Tuscany, criticised the company. Particular attention was given to "lifeboats that did not come down, crew who did not know what to do [and] scant preparation in crisis management".

In an interview by the police, the captain claims that company bosses pressured cruise ships to sail close to Giglio Island to provide a spectacle for passengers. As the economic downturn threatens profits, shortcuts and further incidents are inevitable.

All the evidence shows that, 100 years on, profit rules the waves. Through a sustained campaign of unionisation, safety can be forced to the fore of the agenda in the cruise industry.

That should be part of the battle to kick out the Con-Dem coalition. Just days before the Costa Concordia sank, Prime Minister Cameron attacked the 'monster' of health and safety regulation, promising to make it more business friendly. Only an industry democratically run and controlled by workers, a nationalised shipping industry, can guarantee health and safety will be put before the short term profit driven interests of private industry.