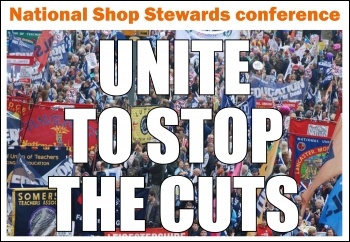 Unite to stop the cuts 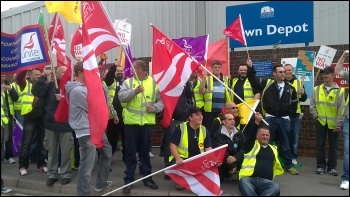 The mood to fight the cuts, which brought over half a million onto the streets on 26 March, has been boiling up. Thousands of trade unionists have voted to support strike action against the cuts.

Most recently the Communication Workers Union (CWU) conference has voted unanimously to work with other trade unions and campaigning organisations to stop the cuts. It calls on the TUC to coordinate a 24-hour general strike against the cuts and attacks on wages and pensions. The leadership at branch, regional and national level is instructed to seek to coordinate campaigns and strikes with other unions.

The National Shop Stewards Network (NSSN) conference 2011, that takes place on Saturday 11 June, is a must for all workers willing to play a part in getting our national trade unions to stand up decisively against this government of the rich - and even richer!

We invite shop stewards and workplace reps, in the public or private sector, who daily confront bosses over the driving down of conditions and pay, to come along.

We welcome students, who showed such courage and dynamism in their fees demonstrations last winter, and who now want to link up with workers in similar struggles. 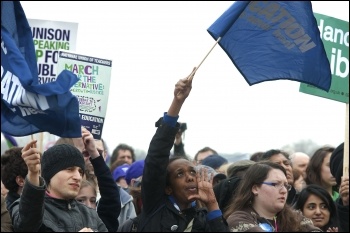 We are also keen to win the participation of local anti-cuts campaigners who see the trade unions as key to their success. So waste no time! Register now. All union reps and stewards are automatically delegates. Everyone else is a welcome visitor.

The conference takes place just a few weeks before a momentous joint strike on 30 June against the Con-Dem pensions robbery. Around 750,000 teachers and civil servants in NUT, UCU, ATL and PCS are likely to take the lead and pour onto the streets in every area of the country.

The NSSN conference hopes to encourage delegates to act as organisers of support in their areas, to help get solidarity activities from workers, especially those in other unions whose leaderships are facing the same pensions attack, but who are, as yet, dragging their feet. It is crucial that this attack is fought off now by all unions.

Leading speakers and militant activists on the ground will spell out to the conference what is needed and encourage discussion and debate on the way forward.

There will also be a range of workers engaged in various battles like those 400 workers locked out at Saltend, like blacklisted construction workers, and sacked tube drivers.

There is no doubt the bosses are prepared to squash militancy by individuals or groups of workers. They know what's coming and will use everything at their disposal, especially the anti-trade union laws, to dampen and render ineffective, a serious fightback.

Two years ago the NSSN conference included the leaders of the inspiring battles at Visteon, Lindsey and Linamar. Last year we affirmed international solidarity by inviting leading trade unionists involved in mass demos and general strikes in Spain, Ireland and Greece.

This year British workers are about to embark on our own very real battle on pensions. Those who come to NSSN conference 2011 could play a vital part in helping ensure success. Make sure you are there!

Speakers include: Alex Gordon, president RMT, rank and file fighters like Keith Gibson, locked out at Saltend along with 200 workers, and Frank Morris, construction worker blacklisted from the Olympic site. Also leaders from NUT, PCS and other unions.

To register for the National Shop Stewards Network conference go to www.shopstewards.net/conference.htm