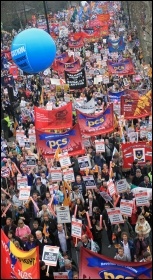 Public sector workers will be at the sharp end of more austerity but also at the centre of the opposition against it.

The PCS civil service union, the FBU firefighters' union and the POA prison officers' union are holding their 2015 conferences in the immediate aftermath of the Tories winning the general election.

From top to bottom, the trade union movement has to urgently discuss how we organise the resistance to more cuts and attacks on union rights.

There has to be an emergency TUC general council where coordinated strike action, including a 24-hour general strike, has to be at the core of the strategy. But we also need to build rank and file pressure on the union leaders.

More anti-union laws, including raising the threshold for strike ballots, could be announced as early as the Queen's Speech on 27 May. Trade unionists must prepare to defy any such restrictions, most effectively in a united fashion around concrete issues that affect workers, like breaking the pay freeze.

As John McInally, national vice president of the PCS, has said: "The TUC must ensure there is no repeat of the lack of leadership in the 2011 pensions dispute that saw a public sector general strike followed by a humiliating surrender that opened the doors to further attacks and a deepening of austerity.

"Rather than reacting to events the TUC must now pull together the unions to implement its policy of building coordinated campaigns against the pay freeze and unity in action against austerity. Our movement at every level, including the TUC, must now accept the policy long advocated by PCS and a few other unions of no cuts, no privatisation, as the only viable basis on which to fight austerity."

To take this struggle forward, this year's National Shop Stewards Network conference is meeting in London on 4 July, two weeks after the 20 June anti-austerity demonstration called by the People's Assembly. Our conference is open to everyone in the trade union and anti-cuts movements who are determined to organise the fightback against the Tories. Register today!