The Socialist spoke to Petrit about the dispute. 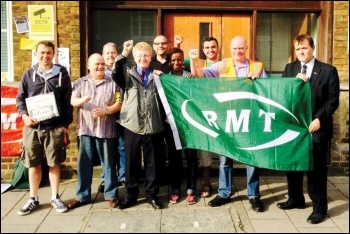 Why is this dispute taking place?

I was sacked by Sodexo on 7 January on trumped up charges. I brought a number of tribunal claims against Sodexo on 19 June. The tribunal unanimously ruled that I was unfairly dismissed due to my trade union activities and I won 100% compensation (£31,290.07). But the company has refused to reinstate me. We are left with no option but to take strike action.

So what reasons were given for your sacking?

Last year I was demoted to chef supervisor on trumped up charges. They were shown to be fictitious. The tribunal ruled that my demotion amounted to a dismissal.

The management put up members to raise grievances against me. The person who accused me of bullying and harassing him turned out to be a thief and had been stealing cash from the company all along. Three or four months after I was demoted, he was sacked.

Later on, on two other charges of bullying, Sodexo, despite my defence and protesting that I was innocent, proceeded with the disciplinary and then dismissed me on trumped up charges.

Why have they targeted you?

We went around and organised. I built the membership. Then we asked for recognition. Being anti-union, management and the company tried to make it impossible for me and the union to recruit. But after hard work and with the determination of the RMT and some activists who helped me recruit, at the end we demonstrated that we had the members required.

Around October 2012 we went to arbitration talks at Acas. We needed a membership of 50% plus one of the workforce for recognition. We showed we had that. At Acas we found out the company had not filled vacancies, and had been overcharging TfL for 15 staff who didn't exist, I called them 'ghost staff'. When we challenged the numbers, Sodexo agreed with our numbers but declared to Acas that they will recruit 15 new staff by the next talks which were planned within a few days. Sodexo had been charging TfL for 156 staff when in fact they only had 140 staff.

Sodexo was found guilty of similar practice on a Metropolitan Police contract a few years ago. They lost the contract when they got accused of cheating the public purse and stealing from taxpayers.

This was also an attempt to jeopardise our recognition - we said we had the numbers required despite their desperate last minute attempt. Acas confirmed we had the numbers required and recommended that the RMT be recognised as the sole union for the bargaining purposes to which the RMT and Sodexo agreed in principle. However, from October 2012 to April 2013 Sodexo refused to sign the recognition acknowledgment, using many excuses, including that they didn't have anybody with the authority to sign it. Eventually it was signed.

They made many attempts to stop us recruiting, including accusing me of bullying and harassing staff. They suspended me on trumped-up charges to attempt to keep me away from the workforce, but I still went around and recruited.

Members joined the union and are still joining despite the company using every tactic to stop them.

It's the 20th biggest company in the world. Sodexo is seen as being vicious, as bullies. They have been found guilty of racism in court. An article published by the Guardian on 19 June 2014 says a manager hit a black lady while she was at work. When she asked him why, he said it was 'punch a black week'. There were certain corridors and areas at one of their head offices that were deemed 'whites only'. This is not just in the UK, in 2005 Sodexo were found guilty and had to pay 47.2 million to settle a lawsuit brought by thousands of black people in the US.

Sodexo don't pay the Living Wage, they pay poverty wages. Sodexo is one of the major private contractors used by the government, including defence, justice, NHS, schools, prisons, care homes, and the TfL (Transport for London) contract which comes to an end in June 2015 - all public funds and taxpayers' money could be better spent.

What should be done?

The RMT is calling on TfL bosses and the government to step in and reinstate me. They should also carry out a full investigation into Sodexo contracts. These scandal-prone subcontracting leeches, including G4S and Serco, should be banned from the public sector.

This version of this article was first posted on the Socialist Party website on 6 August 2014 and may vary slightly from the version subsequently printed in The Socialist.