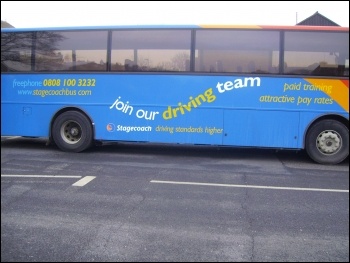 It was -15C overnight. Pickets arrive at Rawmarsh (Rotherham) depot at 4-30am. Water has been poured over the footpath where the strikers assemble making it into a skating ring.

How vindictive and dangerous is that? Just shows how desperate Stagecoach bosses are getting.

Over 300 busdrivers in Barnsley and Rotherham, members of Unite, are now on their 11th day of strike action for decent pay.

Their £9/hour claim has been met but they are sticking out for back-pay from last year and will not accept a pay freeze for the next year.

Stagecoach are doing everything to try to break this strike. Since November, they have bussed in management and scabs from around the country.

Now they are advertising for scabs in the Barnsley JobCentre: £500/week, free accommodation, free bar and bonus! We've contacted the JobCentre workers' union, the PCS, to try to get this withdrawn. 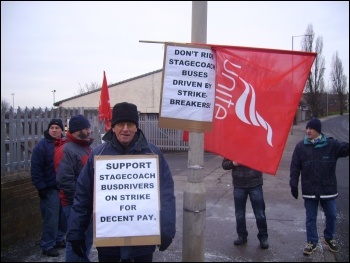 Stagecoach have cut their fares to only £1 and can run no services after 6pm. They are losing millions of pounds to try to break the union.

But boosted by a big solidarity march in Barnsley last Saturday, the strikers are determined to win. They are on strike again on Friday and have named another four strike days in March.

Messages of support should be emailed to Barnsley Unite branch secretary Tony Rushforth at:

Cheques should be made payable to TGWU 9/9 Barnsley and sent to A Rushforth, 45 Tune Street, Wombwell, BarnsleyS73 8PX

This version of this article was first posted on the Socialist Party website on 8 February 2012 and may vary slightly from the version subsequently printed in The Socialist.