The election results have been announced for the executive of Unison

Thursday 1 April should have seen a significant pay rise for all NHS staff. Instead, we have seen further delays and no announcement from the Pay Review Body.

Ballot papers are being sent out to the 1.3 million members of public sector union Unison to elect the new national executive council (NEC), the highest elected body of the union

Branches have not been given a national campaign

Unison union elections: Despite the recent election of 'Keir Starmer-friendly' Christina McAnea as the Unison General Secretary in January, the elections for the national executive council (NEC) could see the union executive swing to the left

Just weeks after the general secretary election, Unison members are beginning the process of electing the union's national executive council (NEC), the lay members' leadership of the union

With a £66 million gap between income and expenditure, Labour-controlled Croydon Council is effectively bankrupt - politically and financially 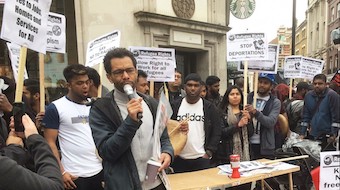 'Members need a leader who will back them and fight alongside them.'