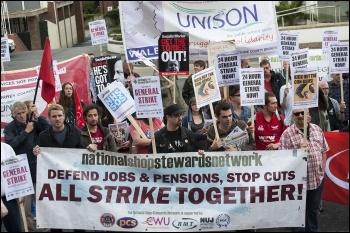 Lobby of the TUC

The National Shop Stewards Network (NSSN) plans to lobby TUC congress. The NSSN will demand the TUC organise a midweek demo against the Tory trade union bill, and prepare for a 24-hour general strike if it passes.

Sunday 13 September 2015, 1 to 3.30pm, at the Grand Hotel, Brighton. If you want to attend and need transport, email info@shopstewards.net.

A leading trade unionist at a striking north London council has fallen victim to anti-union vandalism. John Burgess is branch secretary of public service union Unison in Barnet. The vandal put a nail through a tyre on John's car, and stuck an offensive note to his windscreen. The Socialist Party condemns this cowardly attack, and calls for solidarity with John and his union branch.

Workers at central London's National Gallery are collecting for their strike fund on 13 to 17 July. Members of public service union PCS walk out again on 14 to 16 July, and plan more strikes on 20 to 22. They are fighting guest services privatisation and victimisation of rep Candy Udwin - whose appeal date is 22 July.

Universal credit workers plan to strike on 20 and 21 July over increasingly oppressive conditions. The universal credit scheme is part of Tory attacks on the welfare state. PCS members voted for strikes by 84% on a 56% turnout. Workers are fighting poor resources, bullying management, inadequate training, impossible targets and staff shortages.

Probation workers struck on 14 July after the National Probation Service and community rehabilitation companies offered a 0% pay rise. The two-hour walkout was organised by Unison. 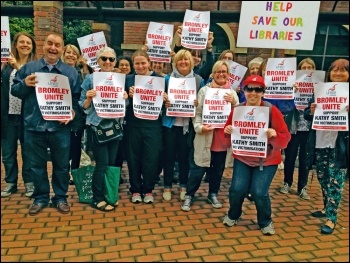 This means they have to carry out their trade union duties - equivalent to full-time jobs - in their spare time. Bromley's Tory council is trying to drive through privatisation of more than 90% of jobs. (Photo O Kasab)