Only unified, revolutionary movement of working class and poor can end the turmoil: The final article in our series on the Middle East

Sudden large scale nationwide protests have shaken Iran. Sections of the population have shown utter defiance of the regime. Young people in particular, facing unemployment estimated at between 25% and 40%, have been to the fore.

On 31 March campaigners internationally, spearheaded by the CWI, demanded justice for former Total/G4S workers in Yemen. As the Socialist (see issue 941) has previously reported, these giant corporations have washed their hands of responsibility for their former workers' unpaid wages and compensation.

The war in Yemen has not only destroyed the lives of civilians but created a landscape where multinational corporations can more easily behave like gangsters in robbing their workers. This includes the French energy giant Total and British security company G4S.

Recently, around 100 workers demonstrated in front of the parliament buildings in Yemen, demanding unpaid wages and justice for murdered colleagues

Over 500 people in Yemen were killed and terrible devastation, injuries, trauma and displacement inflicted in the first two weeks of Saudi Arabia led air strikes 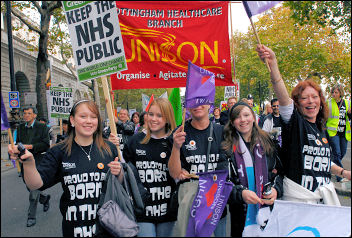 Keep the NHS public! On the 'Save the NHS' march, 3 November 2007 , photo Paul Mattsson

Build a mass movement against cuts and for genuine equality for women: International Women's Day comes at a time of women's struggles against exploitation and harassment in Asia and Latin America, strikes and demonstrations against cuts in Europe and of course mass movements in Tunisia, Egypt, Yemen and Libya and elsewhere...