Higher education: In the new year honours, five 'fat cat' current and former vice-chancellors were rewarded for their 'services to education'

"42% of people in Northern Ireland live in fuel poverty and it is much higher among elderly households. 13,000 are using foodbanks and politicians do nothing, yet public money will pay for the heating of the Northern Ireland Ferrari showroom for the next 20 years."

Reports from Socialist Students activities at freshers fairs as universities go back.

Raising tuition fees, creation of for-profit universities, as well as the widely criticised teaching excellence framework, are all part of making higher education part of the marketplace.

Arriving on campus this year? Student debt, super-expensive housing and the prospect of graduating to low-paid and insecure work will be on the minds of many 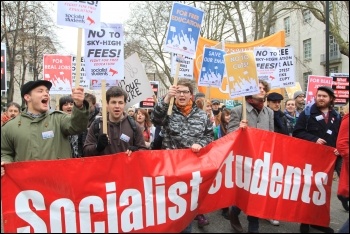 Part of a week of action opposing student loan privatisation: The Student Loan Company (SLC) is up for sale.

Grants for Wales's poorest and disabled students are being cut by 15% in real terms.