On 19 December 2021 the second round of the presidential election was held in Chile. Gabriel Boric, of the Frente Amplio electoral coalition, obtained an overwhelming victory, winning more than four and

José Antonio Kast, the Republican party's far-right presidential election candidate, who defends the brutal Pinochet dictatorship (1973-90), is a threat to the freedoms and social reforms of the people of Chile. 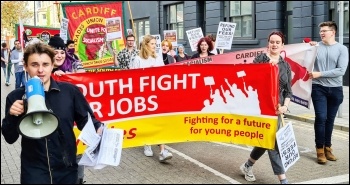 Discussion on how socialist ideas can change the world is more necessary than ever.

After a decade of Tory austerity and a global pandemic threatening millions of jobs, young people are more vulnerable than ever.

Young members of the Socialist Party met in Hyde Park, London, on Saturday 14 June to discuss the issues facing young people in the city and the youth campaigns that we can launch over the summer.

Despite the Tory government extending coronavirus restrictions until 19 July, rather than bringing them to an end on 21 June, the furlough scheme will continue to be downgraded and gradually dismantled as planned

The government intends the biggest curtailment of the right to protest in a generation.

All over the country young people have taken to the streets in their thousands to defend the right to protest and voice their opposition to the Police, Crime, Sentencing and Courts Bill

- discussing how a movement can be built to transform education and students' lives.

In another Tory U-turn, Education Secretary Gavin Williamson has told the second class of Covid that A-level and GCSE exams will not be taking place at the end of the 2020-21 academic year

Youth unemployment has reached 13%. On 25 October, students and young workers will be come together from across the country in an online rally hosted by Young Socialists and Socialist Students